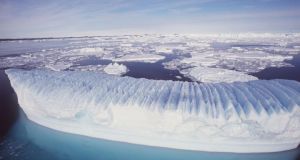 Dr Anders Levermann told a side event at the UN climate talks in Bonn that the Earth has entered a new era of irreversible climate change: “West Antarctica has tipped and there isn’t anything we can do about it.” Photograph: Reuters/Australian Antarctic Division

“We have entered a new era of irreversible climate change, a tipping point of part of the climate system,” he told a side event at the UN climate talks in Bonn. “West Antarctica has tipped and there isn’t anything we can do about it.”

As delegates from 185 countries continued their informal consultations on a new climate treaty, Dr Levermann said parts of the east Antarctic ice shelf were also “showing signs of instability” and could be lost if the “ice plug” still holding it was eroded.

“We need to keep global warming low enough to avoid pulling that plug,” he warned. Otherwise, the Wilkes Ice Basin and other large glaciers could be “sucked” into the Southern Ocean over time, feeding a rise in sea levels of three or four metres.

Dr Levermann explained that the instability of Antarctic ice shelves was a “natural phenomenon”, but the rate of melting would be accelerated by global warming: “The response of the climate system is not linear; it can respond in a very drastic manner.”

A lead author for the UN Intergovernmental Panel on Climate Change, dealing with sea-level rise in its Fifth Assessment Report, he said levels had risen by 20cm on average over the past 100 years and were expected to rise by a metre or more by 2100.

For each additional one degree of warming, Dr Levermann anticipated sea levels could rise by as much as 2.3 metres as more glaciers melt away.

“This will obviously affect populated areas, small island states and all low-lying coastlines.”

Asked how long it would take for Antarctic ice shelfs to melt, he said this needed further detailed research. “Ice timescales are very long. There could be variability in the ice shelfs, but the latest study says it will continue to contribute to sea level rise.”

Pam Pearson, US-born director of the International Cryosphere Climate Initiative, said it was imperative action was taken now because “billions of people will be affected” if the ice shelfs melt. “We can still determine how quickly it occurs.”

However, nearly everyone at the UN climate talks in Bonn agrees that the commitments made so far by countries to cut their greenhouse gas emissions fall well short of what would be needed to achieve the target of limiting warming at two degrees.

Sven Harmeling, of Care International, said countries would need to “scale up” the level of ambition if a credible deal was to be reached at the Paris climate conference in December 2015 – particularly on what’s known as “intended nationally-determined contributions”.

He said these would form a major part of the 2015 agreement, and needed to be submitted to the UN climate secretariat by next March at the latest, so that they could be assessed for their adequacy by other parties, including civil society representatives.