Marine Le Pen’s niece tells US conservatives at CPac: ‘We want our country back’ 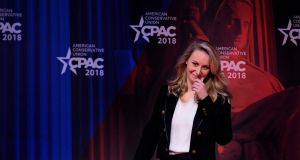 Marion Maréchal Le Pen was cheered at the Conservative Political Action Conference in Maryland on Thursday, signalling a new acceptance of the French far right among US conservatives and the possibility of a political comeback in France for Ms Maréchal Le Pen (28).

Smiling and pushing back a lock of blonde hair, Ms Maréchal Le Pen delivered her 10-minute speech in English, interrupted by cries of “Vive la France”. She praised President Donald Trump and lambasted the FN’s traditional bugbears, the EU and Islam.

Ms Maréchal Le Pen is a single mother, practicising Catholic and social conservative who, unlike her aunt, opposes efforts by gay people to have children.

Ms Maréchal Le Pen blamed the EU for allegedly depriving France of its freedom. “After 1,500 years of existence, it is us, the the French, who now must fight for our independence,” she said. “The EU is in the process of slowing killing millenary nations.”

Ms Maréchal Le Pen denounced “the development of an Islamic counter-society in France”, which she attributed to “40 years of massive immigration, Islamic lobby and political correctness”. France, she warned, “is in the process of passing from the eldest daughter of the Catholic Church to the little niece of Islam. And the terrorism is only the tip of the iceberg.”

Ms Maréchal Le Pen won the loudest cheers when she praised Mr Trump and imitated his rhetoric. “I am not offended when I hear President Donald Trump say ‘America first’,” she said. “In fact, I want America first for the American people, I want Britain first for the British people and I want France first for the French people . . . Just like you, we want our country back.”

Marine Le Pen has tried to quash rumours that she is jealous of her popular and attractive young niece. Mr Trump did not receive the FN leader when she went to Trump Tower in Manhattan in January 2017.

The FN leader intends to change the party’s name at a congress on March 11th and 12th.