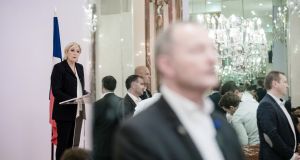 Marine Le Pen during an election campaign event in Paris on Monday. “I don’t think that France is responsible for the Vél d’Hiv,” she said earlier this week. Photograph: Marlene Awaad/Bloomberg

French Front National leader Marine Le Pen has been strongly criticised for remarks she made about the Holocaust, two weeks before the first round of the French presidential election.

Ms Le Pen cast doubt on French responsibility in the deportation of Jews during the second World War, undermining years of her own efforts to dissociate the extreme right-wing Front National (FN) from second World War revisionism.

“I don’t think that France is responsible for the Vél d’Hiv,” Ms Le Pen, who is tied for first place in polls with the centrist Emmanuel Macron, said on April 9th.

Some 13,000 Jewish men, women and children were rounded up by French police on July 16th, 1942, and taken to the Vélodrome d’Hiver cycling race track, for deportation to Nazi death camps.

“If someone was responsible, it was those who were in power at the time, which is not France,” Ms Le Pen continued. “France has been abused in the minds of people for years. We taught our children that they had every reason to criticise, to see only the darkest historic aspects. I want them to be proud of being French again.”

The Israeli foreign ministry warned that anti-Semitism “is once again raising its head”, adding that “this declaration is contrary to historical truth, as expressed in the statements of successive French presidents”.

Ms Le Pen later issued a statement saying that “like Charles de Gaulle and Francois Mitterrand. I consider that France and the Republic were in London during the occupation, and that the [collaborationist] Vichy regime was not France”.

French leaders denied responsibility for the deportation of Jews for a half century after the war. It was not until the book Vichy France, by US historian Robert Paxton, was published in 1972 that France slowly began admit to the role it played in aiding and abetting the Nazi death machine.

Not until Jacques Chirac’s commemorative speech at the Vél d’Hiv in July 1995 did a French leader recognise that “France, the homeland of the Enlightenment and of the rights of man ... on that day, committed the irreparable.”

“Some had forgotten that Marine Le Pen is the daughter of Jean-Marie Le Pen,” Ms Le Pen’s chief opponent in the presidential election, Emmanuel Macron, told BFM-TV. “She made a serious error.”

The Nazi hunters Serge and Arno Klarsfeld, the son and grandson of a Jewish deportee who died at Auschwitz, said the controversy highlighted “the umbilical cord that still ties Marine Le Pen to her father”.

When Mr Chirac made his Vél d’Hiv speech, Jean-Marie Le Pen said the president was paying his “electoral debt towards the Jewish community”. Le Pen the père repeatedly called the Holocaust “a detail of history”. Marine Le Pen expelled him from the FN in 2015 because of such provocative statements.

Unlike her father, Ms Le Pen does not absolve the Vichy regime of responsibility. She has merely adopted the traditional Gaullist viewpoint that Vichy did not represent France.

In an interview with Le Figaro, Ms Le Pen condemned “Islamist anti-Semitism”, claiming that “young Jewish compatriots dare not wear the kippa in the street”.

Ms Le Pen criticised Mr Macron for saying that France committed “crimes against humanity” during the Algerian war. “He accuses the country that he wants to rule of the worst crimes that exist!” she said.

The French right have long opposed what it terms “repentance” for French deeds through history. Ms Le Pen’s remarks may have been an attempt to lure voters from the conservative candidate François Fillon.