Many fear legacy of Cervantes in danger as 400th anniversary approaches 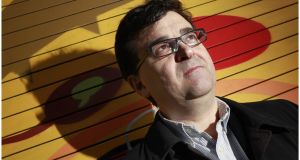 He is widely hailed as the Spanish language’s greatest ever writer and a man whose books transformed fiction across the globe.

But as the 400th anniversary of the death of Miguel de Cervantes approaches, many fear that instead of being celebrated appropriately, his legacy is in danger of being locked in the past, of interest only to academics and the cultural elite. Cervantes died on April 22nd, 1616, having sealed his reputation with the two-part publication of The Ingenious Gentleman Don Quixote of La Mancha (known more commonly as Don Quixote). Recounting the adventures of a deluded old man who believes himself to be a medieval knight, it is frequently described as the first modern novel.

But preparations to mark the anniversary have been surprisingly muted, drawing complaints that Spain takes Cervantes for granted.

Darío Villanueva, the director of the Spanish Royal Academy, which oversees Spanish language usage, warned last month that the country “should not let this opportunity pass by”.

The novelist Javier Cercas has been less diplomatic, telling El País newspaper that the lack of attention being paid to the anniversary is “an example of the contempt that the elites of his time felt towards Cervantes and, specifically, Don Quixote”.

He added: “I’ve often asked if we Spanish deserve Cervantes. Now I know we don’t.”

Much of this criticism was driven by an apparently inexplicable delay in the Spanish government’s announcement of its programme of anniversary events. Last autumn, even the head of the Cervantes cultural institute, Victor García de la Concha, expressed concern that the planning was “a bit slow”.

The secretary of state for culture, José María Lassalle, said 229 events will mark the anniversary, including exhibitions, concerts, plays and symposiums.

However, there was an air of improvisation about the announcement, with over a quarter of those activities being approved just moments before Lassalle’s press conference.

A total of €4 million of state money is being dedicated to the celebrations. But Javier Rodríguez Palacios, the Socialist mayor of Cervantes’s hometown, Alcalá de Henares, complained that without substantial private financing the celebrations will run into trouble.

The Spanish government’s handling of the anniversary has not been helped by comparisons with the parallel celebrations taking place in the UK to mark 400 years since the passing of William Shakespeare (who is believed to have died the day after Cervantes).

Much has been made in Spain of the fact that British prime minister David Cameron put his name to a newspaper article extolling Shakespeare’s virtues, kicking off a year packed with traditional and contemporary activities across the world to celebrate the bard. The Spanish government, meanwhile, appears much less involved.

That can be partly explained by the uncertain political situation in Spain, with an acting conservative administration in place since elections in December.

“There is no political interest in this, because the politicians are thinking about other things,” Soledad Puértolas, a prize-winning novelist, told The Irish Times.

“The English have managed to sell Shakespeare as one of the pillars of their language, because theirs is a more pragmatic country than ours. They’ve managed to make him a major figure not just in their own language, but in everybody’s language . . . I think the Irish also give Joyce a lot of importance.”

She added: “Spain is not a place that knows how to acknowledge its culture.”

“He is a point of unity for all Spaniards and the Spanish cultural world,” he said.

However, a poll last year by the CIS national research centre showed that only one in five Spaniards had read Don Quixote. Cervantes did hit the headlines recently, however, when historians and scientists found his coffin and remains buried under a convent in Madrid.

José Flores, a pensioner, is one of those who has read Cervantes’s masterpiece. “He’s one of the greats,” he says. “But he hasn’t been made popular enough.”