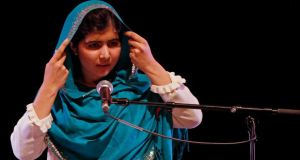 The 16-year-old was attacked last year while on a school bus in northwestern Pakistan, but recovered after medical treatment in Britain.

She is also a favourite among experts and betting agencies to be named the winner of the Nobel Peace Prize tomorrow.

“She is an icon of courage for all teenagers who dare to pursue their aspirations and, like a candle, she lights a path out of darkness,” said Joseph Daul, chairman of the centre-right European People’s Party in the European Parliament.

Ms Yousafzai started her campaigning by writing blogs in 2009 in which she described how the militant Islamist Taliban prevented girls like her from going to school.

She quickly rose to international fame when more and more foreign media outlets conducted interviews with her. Her growing profile attracted the Taliban’s attention and led to frequent death threats.

“I was not worried about myself that much. I was worried about my father. We could not believe they would be so cruel as to kill a child, as I was 14 at the time,” Ms Yousafzai said in a US television interview with The Daily Show on Tuesday.

Her book “I Am Malala” is currently the second-best selling book on Amazon. com.

The Sakharov Prize for freedom of thought has been awarded by the European Parliament each year since 1988 to commemorate Soviet scientist and dissident Andrei Sakharov.

Ms Yousafzai was chosen by a vote among the heads of all the political groups in the 750-member parliament.

Mr Snowden had been nominated by the Green group in the parliament for what it said was his enormous service to human rights and European citizens when he disclosed secret US telephone and Internet surveillance programmes.