French president to meet May, Merkel and Mali president during Alsace-Moselle events 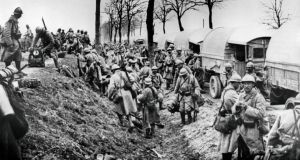 French president Emmanuel Macron will begin a marathon, six-day pilgrimage to key locations of the first World War on Sunday, with German president Frank-Walter Steinmeier at the cathedral of Notre Dame de Strasbourg.

The leaders will attend a concert featuring the works of Beethoven and Débussy at Notre Dame de Strasbourg, marking the centenary of the return of Alsace-Moselle to France.

The French president chose the name itinérance mémorielle or “memorial wandering” for his trip along the former frontlines of northeastern France. He will visit two regions, 11 departments and 17 towns, many of which have never seen a French head of state.

“It’s about going in search of ‘our ancestors the poilus’,” an adviser to Macron said. The vast majority of the combatants of the first World War were civilians, and they were affectionately known as poilus because most wore moustaches.

“It’s about refinding our roots, which we are in danger of losing,” the adviser continued. “It is also about saluting the extraordinary capacity of the French people to rebound and rebuild.”

That message of recovery is relevant today, as hopes raised by the election of France’s youngest president flicker. Macron sank to an unprecedented low in opinion polls this week, with a 26 per cent approval rating.

Like much of what Macron does, the centenary week will be long, complicated and symbolic. The French are disgruntled over declining purchasing power and may perceive their president’s “wandering” as a theatrical vanity project. Like François Hollande before him, Macron risks becoming the “president of history”.

Northeastern France was devastated in two world wars, by deindustrialisation and the transformation of agriculture. The region suffers from high levels of joblessness and poverty. Macron says he wants to create ties with local people and officials.

From Strasbourg, Macron will travel to Morhange,in Moselle, where 27,000 lives were lost in the first great battle of the first World War, on August 22nd, 1914.

He will move on to the ridge at Les Éparges, in the Meuse, where 12,000 French and Germans died between February and April 1915, with neither side taking any territory. The first World War author Maurice Genevoix survived the Battle of Les Éparges and wrote a book about it. Macron will announce his “Pantheonisation”.

At Verdun, the French president will visit the Douaumont ossuary, which holds the bones of 130,000 of the more than 300,000 French and Germans who perished there in 1916.

At Reims, Macron will be joined by the president of Mali, Ibrahim Boubacar Keita. They will pay homage to African troops from French colonies who defended Reims in 1918. About 30,000 of the 200,000 Africans who fought for France were killed.

In 1940, occupying German troops destroyed a bronze monument portraying five tirailleurs sénégalais. An identical statue survived in Bamako, and a replica was reinstalled in Reims in 2013.

Macron will chair his weekly cabinet meeting on Wednesday at Charleville-Mézières, in the Ardennes. The area was occupied for almost the entire war, and was the farthest forward German position.

At La Pierre d’Haudroy, Macron will stand to attention at 8.20pm on November 7th, as the same bugle which announced the first ceasefire will be played, exactly 100 years after German negotiators crossed French lines.

Macron will stop at Notre-Dame-de-Lorette, where the “Ring of Memory”, inaugurated at the beginning of the centenary, is inscribed with the names of 580,000 soldiers of all nationalities who died in the war.

British prime minister Theresa May will have lunch with Macron at Albert, in the Somme, on Friday, November 9th. The golden statue of the Virgin atop the steeple in Albert leaned dramatically after she was hit by shellfire. Poilus and Tommies said the war would end when the Virgin fell. The basilica was destroyed in April 1918, and has since been rebuilt.

May and Macron will then visit Sir Edwin Lutyens’s memorial to 72,000 British and South African soldiers who disappeared in the Battle of the Somme. Thiepval is the largest such monument in the Commonwealth.

Macron will complete his “wandering” at Rethondes, near Compiègne, next Saturday, where he will be joined by German chancellor Angela Merkel. The armistice that ended “the war to end all wars” was signed in a railway car there, at 6am on November 11th, 1918.

“They will be walking in the footsteps of Helmut Kohl and François Mitterrand,” a source at the Élysée said of Macron and Merkel. The image of the German chancellor and French president holding hands at Verdun in 1984 came to symbolise Franco-German reconciliation.

Macron will return to Paris for the main centenary ceremony, at the Arc de Triomphe on the morning of Sunday, November 11th. It will be attended by some 60 heads of state and government, including Vladimir Putin and Donald Trump. The three-day “Paris Peace Forum” will begin that afternoon.