‘Significant’ announcement on easing of lockdown in region expected this week 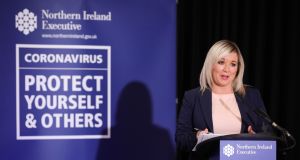 Northern Ireland Deputy First Minister Michelle O’Neill: ‘We want to keep giving people that wee bit more to try to get back to some semblance of normality.’ Photograph: Kelvin Boyes/PA Wire

The North’s Deputy First Minister Michelle O’Neill has suggested there will be “significant” developments in the coming week in terms of easing the lockdown in Northern Ireland.

On Sunday the Department of Health in its daily bulletin reported that there were no deaths in Northern Ireland from coronavirus. This was the fifth time in the past eight days that it recorded zero deaths. The death rate remains at 541.

The department also reported just seven new confirmed cases of Covid-19 in Northern Ireland taking the number of cases to 4,848.

With the death rate continuing to fall Ms O’Neill said there will be announcements on Monday and Thursday favourable to the hospitality industry and to other sectors as well.

At the start of the month it was announced that from July 20th hotels, guest houses, B&Bs, hostels and caravan and mobile home sites could reopen.

Ms O’Neill suggested there could be further relaxations. “We want to keep moving forward,” she said. “We want to keep giving people that wee bit more to try to get back to some semblance of normality. So the hospitality sector is one, but there are other sectors out there that are now asking for an indicative dates and I think it’s important that we give them all indicative dates,” she added.

“I want to signpost that Monday and Thursday will be significant days in terms of Executive announcements,” she told the BBC’s Politics Programme.

Ms O’Neill also sounded a note of caution. While she wanted the hospitality sector to open up she also wanted to avoid a second wave of the virus. “Imagine if we were to open up now and have to shut everything down in four or six weeks?”

“I’m working our way through our plan gradually and incrementally. We’re certainly in a good place, making positive steps forward, but we need to do it gradually,” she said.

Ms O’Neill said that as relaxations increased childcare and reopening schools would be key issues.

“More people are returning to work but they need childcare. You can’t tell them to go back to work without saying what childcare will look like. We have asked the health and education Ministers to bring forward the childcare recovery plan,” she said.

“For me, there are two key issues in the week ahead: what does school look like in September and what does childcare look like for our families?”

Last Thursday First Minister Arlene Foster and Ms O’Neill announced further easing of the lockdown. These included a person living alone being permitted to visit one other household; the opening of all non-essential retail, including shopping centres; groups of six to ten people who do not live together allowed to meet outdoors; permission for elite athletes to train outdoors; and allowing house moves and the sale of homes.

Meanwhile, Alliance party Assembly member John Blair has raised an issue about a demonstration of several hundred people outside Belfast City Hall on Saturday to protect war memorials that they feared could be threatened by the Black Lives Matter campaign.

The protest took place without incident.

Mr Blair said the PSNI confirmed that no arrests were made on Saturday while a “significant number” of fines were given out at last week’s Black Lives Matter protests in Belfast and Derry.

“People should not be gathering in large groups in the midst of a pandemic. They are putting into risk not only their own lives, but the lives of others,” said Mr Blair.

He added, “However, the PSNI needs to apply a consistent approach to all such protests or else they risk damaging the community confidence in the organisation, particularly from ethnic minority members of our society.”