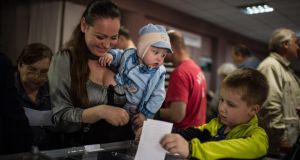 A woman and children at a ballot box during the referendum organised by members of the so-called Donetsk People’s Republic at a polling station in Mariupol, Ukraine, today. Photograph: Alexey Furman/EPA 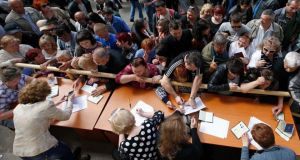 People stand in a line to receive ballots from members of a local election commission during the referendum on the status of Donetsk region in the eastern Ukrainian city of Mariupol today. Photograph: Reuters

Residents of eastern Ukraine have been forming long queues at polling stations today to cast their votes in hastily organised independence referendums, defying the central government, which said the ballots were illegal and claimed they were funded by neighbouring Russia.

The votes seek approval for declaring so-called sovereign people’s republics in the Donetsk and Luhansk regions, where pro-Russian insurgents have seized government buildings and clashed with police and Ukrainian troops over the past month.

Ukraine’s interim president warned that independence for eastern regions would destroy the country’s economy. “This is a step into the abyss for the regions,” Oleksandr Turchynov said in comments posted on the presidential website.

Polling stations opened at 8am local time and were due to close at 10pm. There were reports of sporadic clashes, but the situation remained calm in most of the sprawling regions, which have a population of 6.5 million. Referendum organisers said they expected a high turnout.

Insurgents in the city of Slaviansk, which has seen some of the most violent clashes between pro-Russian militants and government forces in recent weeks, exchanged fire with Ukrainian troops on the outskirts of the city overnight. The Ukrainian Defence Ministry said a soldier was wounded in a mortar shelling.

The port city of Mariupol on the Sea of Azov has also remained on edge after clashes on Friday in which at least seven died. Long lines of voters were seen in the city’s streets.

The Ukrainian government and the West have accused Russia of fomenting or even directing the unrest in the east, with the goal of destabilising Ukraine or finding a pretext for invasion. Russia has rejected the accusations.

Russian president Vladimir Putin had asked the referendums’ organisers to delay the vote as he bargained with western powers on conditions for defusing the worst crisis in relations between Russia and the West since the Cold War. The insurgents refused to heed his call.

“For us, the most important thing to show the legitimacy of the referendum is the amount of people who will vote,” said Denis Pushilin, leader of the self-proclaimed Donetsk People’s Republic. “But for now, we’re waiting for the official reaction, particularly from our brothers in Russia.”

Election organisers said more than 30 per cent of voters cast ballots in the first three hours of voting, but with no international oversight mission in attendance, confirming such claims is likely to be all but impossible.

At one polling station in a school in Donetsk, turnout was brisk in the first hour of voting. All voting slips that could be seen in the clear ballot boxes showed the option for autonomy had been selected.

Although election officials in Donetsk have said they are certain turnout will be high, it seems likely that most of those opposed to autonomy will decline to participate.

In Mariupol, scene of fierce fighting last week, officials said there were only eight polling centres for half a million people. Queues grew to hundreds of metres and at one centre voting urns were set out on the pavement against a wall.

Western leaders threatened more sanctions against Russia in the key areas of energy, financial services and engineering if it continues what they regard as efforts to destabilise Ukraine.

Moscow denies any role in the rebellion or any ambitions to absorb the mainly Russian-speaking east into the Russian Federation following its annexation of the Black Sea peninsula of Crimea after a referendum in March.

For a vote on which so much hangs, the referendum seems a decidedly ad hoc affair. Ballot papers have been printed without security provision, polling stations were limited in some areas and there was confusion on quite what people were asked to endorse.

Some see a “Yes” vote as endorsement of autonomy within Ukraine, some as a move to independence and others as a nod to absorption by Russia.

Annexation is favoured by the more prominent rebels, but the ambiguity may reflect their fears an explicit call for full “independence” might not have garnered the support they seek and could leave them in an exposed position towards Kiev.

Mr Turchinov has urged east Ukrainian political leaders to join a “Round Table” discussion on devolution of powers in Ukraine. But he has said he would not negotiate with “terrorists”, a formulation meant to exclude most of the more prominent rebel leaders.