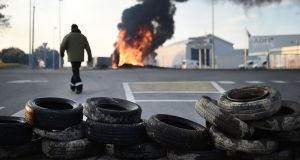 Workers on strike block the access to the harbour of Saint-Nazaire, western france. Photograph: Getty Images

Football fans have until now focused on the risk of jihadist attacks during the Euro 2016 championship, to be held in 10 French cities from June 10th until July 10th.

They must now also consider the danger of strikes, transport chaos and even civil unrest.

France has seen almost daily demonstrations by the left of the left, who demand withdrawal of a new labour law, for 2½ months. But participation was waning and the communist CGT, France’s largest trade union, has turned to more drastic measures, including blockading petroleum refineries and storage facilities and open-ended transport strikes.

Yesterday, railway workers announced daily strikes from May 31st. Civil aviation employees will strike on June 3rd, 4th and 5th. This is in addition to already scheduled train strikes today and tomorrow, marches against the labour law and blockades in French ports tomorrow, an open-ended strike in the Paris metro from June 2nd and further marches on June 14th.

For the first time in the current crisis, the government yesterday used force to “liberate” the Esso petroleum refinery and storage depot at Fos- sur-Mer in the southeastern Bouches-du-Rhône department, which the CGT had occupied overnight.

Transport Minister Alain Vidalies said 2,400 of France’s 12,000 petrol stations are dry or running out of fuel.

The other enduring image of the crisis is that of a burning police car on the sidelines of a police protest against “cop hatred” on the Place de la République on May 17th.

In video footage, policeman Kevin Philippy parried blows from hooded men as he emerged from his burning car. He, the policewoman who was with him, and several others were given medals by interior minister Bernard Cazeneuve.

The government says more than 300 police have been injured by protesters this year. Authorities cosset the police, who have full powers under the state of emergency, while protesters accuse security forces of brutality.

A controversial CGT poster shows the badge of the CRS riot police and a baton in a pool of blood with the words: “Stop police violence! The police must protect citizens, not beat them!”

At a dinner with the Presidential Press Association in 2013, President Francois Hollande said he was worried about the volatility of “the street”. For four years, he has done his utmost to mollify “the street”, by zig-zagging between liberal reforms and concessions to the left of the left, who supported him in 2012. But placards at demonstrations frequently mock Mr Hollande’s assertion in his most recent television interview that “Ca va mieux” – things are improving – in France. “Let us be ungovernable!” is another slogan.

Mr Hollande yesterday accused a “minority” of orchestrating a “strategy of blocage”. Only 3 per cent of French workers belong to the CGT, but the union holds nuisance power far beyond its numbers.

Six other trade unions and student groups are following his lead in the strikes and demonstrations.

Le Figaro’s front-page editorial yesterday accused the CGT of “social terrorism”, while graffiti daubed in red outside the socialist office in the Paris suburb of Palaiseau called the party “social traitors”.

In the early hours of Monday morning, socialist headquarters in Grenoble were sprayed with automatic weapon fire. In Lille, men wearing balaclavas attacked the facade of the socialist federation with baseball bats.

Meanwhile, concerns continue regarding security for Euro 2016. The French Cup final on May 21st was considered a rehearsal for the opening match between France and Romania at the Stade de France on June 10th.

Access points to the stadium have been reduced from 26 to four, resulting in bottlenecks and the entire stadium has been surrounded by a 2.4 metre high fence. Ticket-holders managed to smuggle in smoke and stink bombs, and security forces had to use tear gas, amid wailing children, when the match ended.

Mr Bernard Cazeneuve noted that the COP21 climate conference and Cannes film festival took place without incident. He promised lessons had been learned from the “unfortunate dysfunctions” at Saturday’s match.

1 One hundred Irish retailers for all your online Christmas shopping
2 Des Bishop apologises to Traveller community for comments in interview
3 Gym owner plans to defy restrictions and open
4 Miriam Lord: All test and no trace makes Jack, and heaven knows who else, a very ill boy
5 Family settle case over death in hospital of 23-year-old woman
Real news has value SUBSCRIBE