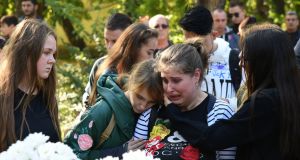 Teenagers mourn victims of the gun and nail-bomb attack at a vocational school in Kerch, Crimea. Photograph: Stringer/EPA

Russian president Vladimir Putin has blamed globalisation and the internet for a mass shooting that killed 21 people at a college in Crimea, as his security services said they needed more control over cyberspace to prevent terror attacks.

Investigators say Vladislav Roslyakov (18) killed 16 fellow students and five staff in a gun and bomb attack on Wednesday at the technical college that he attended in the town of Kerch, before shooting himself dead in its library.

About 40 people are being treated for injuries in hospital, as Russia asks whether Roslyakov had any help preparing the attack and how he acquired explosives and managed legally to buy a gun and at least 150 rounds of ammunition.

“Strange as it may sound, it’s a result of globalisation. On social media and the internet, we see that whole communities have been created,” Mr Putin said on Thursday.

“It all began with well-known, tragic events at schools in the United States. Young people with unstable minds somehow create false heroes for themselves,” he added.

“It means that we’re all reacting badly to changing conditions in the world. We are not creating the necessary interesting and healthy content for young people. They grasp some surrogate for heroism and it leads to tragedies of this kind.”

The Kremlin and the FSB security services that Mr Putin led before becoming president are suspicious of the internet and social media, seeing them as western-dominated technologies that can be used to stir up dissent and street protests.

The FSB already closely monitors communications in Russia, and since July telephone and internet companies have been obliged to store the content of users’ phone calls, text messages and internet traffic for six months, and provide them to investigators on production of a warrant.

“For us professionals, it has long been clear that cyberspace should be under the control of the relevant agencies,” said deputy FSB director Sergei Smirnov. “Without that, it is impossible to guarantee the required provision of information security and successfully prevent modern terrorist threats.”

As some of the most badly injured victims of the attack were airlifted to Moscow, investigators searched for clues as to what motivated Roslyakov, who was pictured walking through the college carrying a gun and wearing black trousers and a white T-shirt apparently emblazoned with the word “Hate” in Russian.

A girl identified as Zlata and described as Roslyakov’s ex-girlfriend told Russian television that he was a gun enthusiast, who had talked of getting revenge on bullying classmates and about “not wanting to live” because of how they treated him.

“Vladislav constantly told me that he often argued with others. He said that he had lost trust in people when his classmates began to humiliate him for not being the same as everyone else,” she said.

“When we talked, everything was fine. He was kind and attentive, and he helped me when things were bad. I feel sorry for the people he shot and I am very sorry that he took his own life. He was a really good friend.”