Interview in thesis reveals struggle within CDU over the single currency 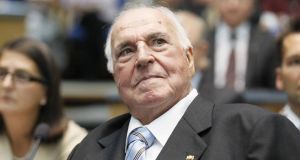 
Helmut Kohl has said he stayed on as chancellor until his political defeat in 1998 because he doubted anyone else had the political authority to guarantee Germany’s entry to the European single currency.

In an interview, Dr Kohl said he sensed considerable resistance in his Christian Democratic Union (CDU) both to the euro and to his anointed successor, Wolfgang Schäuble.

Rather than risk his political legacy by standing down and handing over responsibility to Dr Schäuble, Dr Kohl stayed on despite falling popularity ratings to push through the euro “like a dictator”.

“Dr Schäuble is a very talented man, that is beyond discussion, but this . . . was something someone with full authority had to tackle,” said Dr Kohl in an interview conducted in 2002 for a doctoral thesis and just published by its author, journalist Jens Peter Paul. The former chancellor said he did not dare hold a referendum on the single currency in Germany because “of course I would have lost”.

“We had lots of people in the CDU who spoke out [against the euro],” he said. “No one said ‘I reject this’ but . . . [they would say] ‘we will do this but we will postpone things again for a few years’.”

Dr Kohl added that he linked his “political existence to the project”, and that he wanted the introduction of the euro because it “was a question of the continuity, the irreversibility, of the European project”.


Doubts about Schäuble
Adding to the uncertainty on the euro, he said, were doubts about Dr Schäuble’s political authority because of his physical disability – the result of an assassination attempt in 1990.

“What most [CDU] people thought – though they never said in my presence – was that someone in a wee wheelchair couldn’t be chancellor,” said Dr Kohl. “I was always passionately of the opposite view, citing the example of Franklin D Roosevelt, who won the second World War, but I was never in a majority with this view.”

Much of the resistance in Germany, Dr Kohl said, was to the idea of a currency union without the foundation of a fiscal and economic union. He admitted the euro’s introduction probably cost him the 1998 election. But on reflection he said it was worth it to secure the euro and end centuries of tensions in Europe that had led to war.

“I am a power person. A chancellor has to be if he’s to get something through and, if he is smart, he knows that now is the time to push something through,” he said. “In one case I was like a dictator, and that was with the euro.”