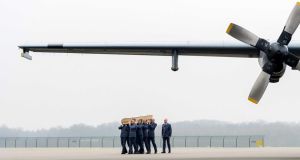 Who knew what and when? The answers to those questions have turned many a chain of what seemed at first to be chaotic events into that worst nightmare of governments: an incipient conspiracy theory. Such is the danger with the downing of Flight MH17.

The Malaysia Airlines Boeing 777 was blown out of the sky over eastern Ukraine on July 17th last with the loss of all 298 passengers and crew, en route to Kuala Lumpur. It was an unspeakable tragedy that nobody, bar the culprits, could have seen coming – or prevented.

But just how true is that? There will always be conspiracy theories that feed off catastrophes. In this case there has been no shortage of geopolitical controversy. The West says the killers were Russian- backed separatists. Moscow claims a Ukrainian air force jet fired the fatal missile.

Even the international investigation being led by the Dutch safety board has been called into question, specifically on the length of time it is taking and the fact that its preliminary report – inexplicably, in the view of many angry relatives – apportioned no blame.

Typically though, the problem for Dutch prime minister Mark Rutte has come from another quarter – and the apparent confusion and a patent unwillingness to put all the information on the table have done nothing to dampen an ominous trickle of smoke.

This was significant for three reasons: because it was the first time that air traffic over Ukraine had been targeted; because the jet was flying at 21,325 feet; and because it was hit by a missile “more powerful” than a shoulder-launched missile – all of which rang alarm bells.

On the day of the An-26 crash, one western analyst on the ground in Ukraine described the attack as “potentially a game-changer”. Until then it had been understood the rebels did not have missiles capable of hitting a high-flying jet. That being so, the Kiev briefing was clearly important. A Dutch diplomat duly attended, and his assessment of the information shared there was sent immediately through the normal diplomatic channels to various government ministries in The Hague.

What happened then? The answer, to the understandable dismay of the MH17 relatives, appears to be “not much” – perhaps even nothing.

Their reasoning, they told deputies in a written statement, had been that in their view the purpose of the Kiev briefing was to alert the international community to Russian “meddling” in Ukraine – rather than to warn specifically about the increased danger in Ukrainian air space.

“The bringing down of a Ukrainian aircraft earlier in the day was mentioned by the Ukrainian minister of foreign affairs only as an example of an escalation in the conflict, and Russia’s role in it,” they said.

Asked if he would publish the diplomat’s report of the Kiev briefing, Koenders said it had not been an actual report, as such, more “diplomatic traffic”. Publishing it would set a damaging precedent.

Scenting blood, the opposition then switched their attention to the prime minister, formally requesting him to publish the diplomat’s report or assessment, in whatever form it was made. In a decision certain to fuel the conspiracy theories, Rutte has refused.

It won’t end there, of course. Already, Christian Democrat deputy Pieter Omtzigt has complained that all the explanations so far have been insufficient – and in the absence of the diplomat’s report, he is indisputably correct.

“It is clear that multiple ministries were aware of the security situation,” he told parliament. “I want to know exactly what information was shared – and with whom.”

Having got nowhere with the politicians, for the time being, the focus has switched now to the security services – whose regulator has waded in, saying he wants clarity on what they knew, if anything; who they told, if anyone; and what transpired, if anything.

It would be ironic indeed if the “spooks” were to emerge as the champions of Dutch transparency.