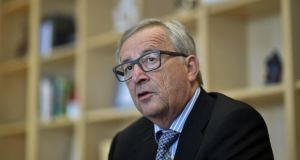 Juncker’s comments in an opinion piece published in France’s Le Figaro and Germany’s Die Welt on Monday come ahead of a meeting of Chancellor Angela Merkel and French President Francois Hollande in Berlin to discuss immigration.

Juncker repeated his criticism of European governments failing to take migrants from Italy and Greece where tens of thousands arrived by boat have over the last months to escape poverty and war in their home countries.

“We don’t need a new summit. Member states have to adopt the European measures and apply them to their territory,” he wrote.

Juncker added that the European Union should draw up a uniform list of “safe countries” to which migrants could be returned.

In June, European Union governments rejected a push by Commission President Jean-Claude Juncker to set mandatory national quotas for states to take in some of the tens of thousands of refugees and migrants crowding ashore in Italy and Greece.

Meanwhile, Angela Merkel and her government spoke out on Monday against violent protests against asylum seekers in the eastern German town of Heidenau over the weekend.

At least 31 German police officers were hurt in scuffles with about 600 protesters in the early hours of Saturday, many hurling bottles and stones, angry about the arrival of asylum seekers.

“The chancellor and the whole government condemn in the strongest manner possible the violence and the aggressive atmosphere towards foreigners there,” government spokesman Steffen Seibert told a regular news conference.

“It is disgusting how right-wing extremists and neo-Nazis attempt to spread their idiotic message of hatred around an asylum shelter,” he said.