Jon Aguirre Such, architect of Indignados, now just a face in the crowd

In early 2011, the young Basque activist was one of Spain’s most recognisable faces 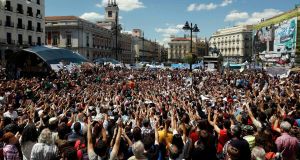 Demonstrators listen to a speaker at Madrid’s famous Puerta del Sol in May, 2011. Jon Aguirre Such got involved in organising a series of demonstrations that became “los indignados”. Photograph: Andrea Comas/Reuters

With his carefully groomed hair, moustache and paisley shirts, Jon Aguirre Such looked more like a 1970s rock guitarist than the voice of a generation.

However, for a few weeks in the spring of 2011, the young Basque man, then 26, was one of Spain’s most recognisable faces in the political arena.

As a member of the grassroots group Democracia Real Ya (Real Democracy Now), Aguirre Such got involved in organising a series of demonstrations and camp-outs which channelled Spaniards’ anger at the political class and its failure to manage the country’s economic crisis.

The protests began on May 15th in Madrid’s Puerta del Sol square, but they quickly spread across Spain and the indignados (or “outraged”), as the demonstrators became known, went on to inspire the Occupy movements in New York, London and other cities around the world.

Five years later, Aguirre Such, who is an architect, still has the moustache and dresses sharply, but he is tired and a little stressed due to his packed schedule as a town planner.

However, he brightens up as he remembers those heady days of social unrest.

On that day, he found himself giving a speech to tens of thousands of people in Madrid’s central square.

“There were normal, everyday people, the kind you’d see in the street,” he says. “And what struck me was the diversity of the people there: different ages, different cultural backgrounds, all sorts.”

That date, known as “15M”, now has a place in the Spanish calendar, and this weekend its fifth anniversary will be celebrated with a series of demonstrations and cultural events. Its international significance will also be highlighted as activists around the world stage “Global Nuit Debout” events, named after the indignados-style protests which have filled Paris’s Place de la République in recent weeks.

Aguirre Such agrees with the historical significance many attach to the movement, even suggesting it has overshadowed France’s own legendary uprising of half a century ago.

“I’m a big fan of May of ’68 and all the thinkers whose work fed into it,” he says. “But I think we made a qualitative leap with which we achieved great things.”

He cites the indignados’ ability to unite different organisations with similar aims or grievances – often through social networks – and make their voices heard. He also points to the hundreds of local organisations that sprang up across Spain in 15M’s wake, not just to debate the big issues, but also to tackle neighbourhood problems which an austerity-stricken state was unable to resolve.

Perhaps most famously, the indignados threw their weight behind a campaign to prevent the eviction of low-income families from their homes for failing to keep up mortgage payments.

Gathering early in the morning outside the property due to be repossessed, activists would block the entrance, physically stopping the authorities from carrying out the eviction.

With Spain’s economy now recovering, these scenes are less frequent but they are an enduring symbol of the recession’s social impact.

“The most important legacy has been to ensure that society has recovered its political capabilities, when it comes to building, protesting, to proposing ideas, to fighting for an improvement in people’s lives,” he says.

Yet he is less strident when discussing what many would identify as the most tangible result of the 2011 uprising: Podemos. The anti-austerity party was founded in early 2014 by a group of political scientists in Madrid who had been on the margins of the protests. By most standards, it has been an extraordinary success, helping overthrow conservative administrations in major cities such as Madrid, Barcelona and Valencia and coming third, just behind the Socialists, in December’s inconclusive general election.

“Our biggest challenge was to avoid getting into institutions because we believed there was another way of doing politics,” he says. “Podemos does ‘party’ politics and the indignados do ‘people’ politics.”

Podemos, along with fellow newcomer Ciudadanos to its right, has ended more than three decades of biparty politics dominated by the conservative Popular Party (PP) and the Socialists. The new, fragmented political landscape meant that no party was able to form a government for the first time in Spain’s modern democratic era in the wake of December’s vote.

Aguirre Such embraces the new turbulence that is rocking the country’s status quo.

“It’s a mistake to think of instability as being negative,” he says. “Not having a government is the best thing that could have happened to Spain. We’ve seen that party politics is unworkable and that there has to be another way.”

That decision was made, he says, after appearing in Time magazine’s People of the Year edition.

“I realised that it wasn’t a good thing: the exposure I was getting wasn’t good for the movement,” he says. “It wasn’t right that a movement which was supposed to be horizontal, which didn’t have leaders, should have such a visible face.”

And with that, he puts his aviator sunglasses on and wanders off into the crowds of central Madrid, where thousands of people once hung on his every word, but where today nobody seems to recognise him.