Parliament to vote for fourth time this afternoon 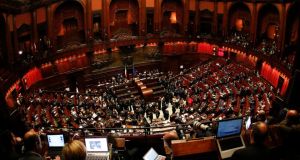 The lower house of the parliament is seen during the presidential election yesterday. Photograph: Tony Gentile/Reuters


Impossible though it may seem, Italy’s political landscape was looking even more confused last night after a day when a joint sitting of both houses of parliament failed in two votes to elect a new state president. Parliament will try again today when this afternoon’s fourth vote, where a simple majority rather than a two-thirds majority is required, may produce a winner.

Yesterday was a traumatic day for the Democratic Party (PD), whose late choice of former trade unionist and Senate Speaker Franco Marini prompted bitter division within the party.

In the end, Mr Marini picked up just 521 votes, far short of the necessary 672 two-thirds majority.

Even as the three-hour-long first vote was taking place yesterday morning, PD militants were protesting angrily and noisily outside the parliament. In essence, the party faithful were furious that Mr Marini had been chosen as someone clearly acceptable to centre-right leader Silvio Berlusconi.

The PDs are scheduled to hold a party meeting this morning to draw up a Plan B. Party hardliners will propose a true blue PD candidate, such as former European Commission president Romano Prodi, arguing against any attempt to appease the centre-right with an agreed candidate.