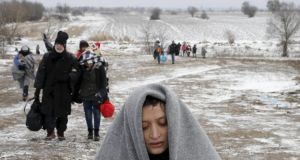 Migrants near Miratovac, Serbia: Critics of the so-called Dublin Regulation, which requires asylum seekers to make their application for protection in the EU state in which they arrive, claim it drives migrants into the hands of smugglers. Photograph: Marko Djurica/Reuters

The Government is likely to resist a move to scrap the rule that allows EU governments to send asylum seekers back to the first EU member-state they reach.

But southern European states have long complained that it places an unfair burden on them, while other critics say it drives migrants into the hands of smugglers. Calls for it to be dropped have intensified in recent months as Greece, Italy and other states have struggled to cope with the biggest influx of refugees and migrants to the continent since the second World War.

The Netherlands, which holds the rotating presidency of the European Council, has pledged to work towards an “overhaul” of the Dublin system. The European Commission is keen to abandon the rule, with a spokeswoman saying this week that there were “systemic deficiencies” in the way the policy was working.

Given that abolishing the rule could leave northern European states more open to migration flows, the British government has already pledged to oppose the idea. The UK’s international development secretary, Justine Greening, said London would be “concerned and strongly against” any change to the first-country rule.

Ireland transferred just 19 people to other EU countries last year under the Dublin Regulation, two more than in 2014. The Department of Justice said these numbers were low because of a transition to new transfer arrangements and that it expected the number of transfers to increase “significantly” this year.

The review of the first-country rule comes amid clear signs that the EU’s controversial relocation scheme is not working. The system, which aims to ease pressure on Greece and Italy by dispersing 160,000 asylum seekers across the union, has so far resulted in just 322 people being relocated within the 28-country bloc.

Ireland has pledged to take in 2,600 people from Syria, Iraq and other war-torn countries under the scheme, but so far it has been offered just 20 individuals. In addition to delays in processing applicants in Greece and Italy, EU states have been slow to make places available. A total of 17 states have indicated a willingness to take in just 4,200 people since the start of the scheme last autumn.