Sydney Letter: Prime minister rails against a ‘retreat to tribalism’ despite earlier comments about asylum seekers 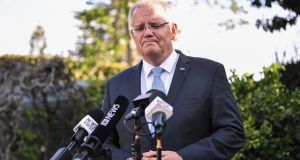 Australian prime minister Scott Morrison: In 2012 he warned that asylum seekers might cause a typhoid outbreak. Photograph: James Gourley/Getty Images

In 2013, after two terms in power, Australia’s Labor government was riven by internecine disputes, had twice torn down prime ministers in internal coups and spent more time talking about itself than its plans for the country. The public, to use the Australian vernacular, had had a gutful and voted it out in a landslide.

In 2019, after two terms in power, Australia’s Liberal-National coalition government is riven by internecine disputes, has twice torn down prime ministers in internal coups and spends more time talking about itself than its plans for the country. The public has had a gutful and was all set to vote it out in two months’ time, probably in a landslide.

But that was before last Friday. That morning, prime minister Scott Morrison probably thought the only new issue he would have to deal with was the climate protest school strikes taking place across the country. By early afternoon, however, news came in of the mass murder of 50 people at two mosques in New Zealand, allegedly carried out by an Australian.

Brenton Tarrant (28) has been charged with murder over the shootings. The prime minister was resolute in his condemnation, saying the actions were those of an “extremist, right-wing, violent terrorist”.

On Wednesday, Morrison met the Turkish ambassador Korhan Karakoc, and asked that the president, Recep Tayyip Erdogan, withdraw remarks threatening that Australians and New Zealanders could be sent home in coffins if they insulted Islam while in the country.

“Your grandparents came here . . . and they returned in caskets,” Erdogan said, referring to the thousands of Australian and New Zealand soldiers who died during the Gallipoli campaign in Turkey during the first World War.

“Have no doubt we will send you back like your grandfathers.”

Morrison has also called for a calmer discourse in Australia. “As debate becomes more fierce, the retreat to tribalism is increasingly taking over, and for some, extremism takes hold,” he said. “This is true of the left and the right, and even more so from those shouting from the fringes to a mainstream of quiet Australians that just want to get on with their lives.”

While he now rails against the “tribalism” of “those shouting from fringes”, Morrison has not addressed his own tribalism, shouted from the heart of political power.

His comments look like dog-whistling when compared with the words of his counterpart in New Zealand, Jacinda Ardern. “Many of those who will have been directly affected by this shooting may be migrants to New Zealand, they may even be refugees here. They have chosen to make New Zealand their home, and it is their home,” she said.

But Greg Barton, a terrorism expert at Deakin University, said both major parties in Australia have pandered to the far-right anti-immigrant One Nation party and its leader Pauline Hanson. “Since the [former prime minister] John Howard election campaign of 2001, both parties have dallied with the vile politics of Pauline Hanson and in the last 12 months this has accelerated. I think we’ve all got to walk back from this and recognise that what was seen to be political sparring has fuelled hateful rhetoric and hateful rhetoric has literally been lethal,” Barton said.

With internal government discord over action on climate change, leadership tensions in the National Party and six ministers announcing they will quit politics at the election expected in May, Labor looked like it was heading for a comfortable win.

But then Christchurch happened and continues to dominate the headlines. Labor has led in all polls for more than two years, but what happened in New Zealand could change that. If people think they need protection from danger, they could revert to the coalition, which polling consistently says is more trusted on security.

But if people examine what Morrison and some of his colleagues said about mainly Muslim asylum seekers before last Friday, and compare it to what they say now, they may think it unacceptable.

The next polling figures, expected next Monday, will have a tale to tell.