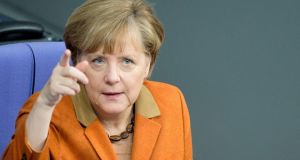 German philosopher Jürgen Habermas has warned that Berlin’s flawed analysis of the euro crisis and its “mean-spirited” response is undermining the European Union from within.

In an address to the Social Democratic Party (SPD), Prof Habermas criticised the party for supporting – both in opposition and now in coalition with Chancellor Angela Merkel – the “drastic treatment” she forced on crisis countries.

Dr Merkel’s “investor-friendly” approach was deeply damaging to democracy, he warned, had “unspeakable” social consequences in crisis countries and had sparked a new wave of nationalism across Europe.

“It is not in our national interest to fall back into the hegemonic position that paved the way to two World Wars and was only overcome through European unification,” said Prof Habermas at a high-level SPD event in Potsdam, near Berlin.

The 84-year-old philosopher and sociologist, considered one of Germany’s foremost intellectuals, has long been an advocate of closer European integration. Thus his warning that the EU’s largest member is driving the bloc in the opposite direction made for uncomfortable listening for SPD politicians.

‘Sovereign debt crisis’
In his 30-minute address, Prof Habermas took aim at Germany’s framing of recent turbulence as a “sovereign debt crisis” in euro periphery countries. After gorging on cheap money before the crisis, so this mainstream German reading of the crisis contends, drastic fiscal diets and social reforms were demanded as a precondition for financial solidarity from the euro zone core lead by Germany.

Prof Habermas argued that this reading ignored how many crisis countries were hobbled by “developments in private debt and not, as claimed, the budgetary policies of the [respective] government”.

Armed with its flawed reading of the crisis, he said, Berlin used its economic and political might to ram through rescue measures appropriate to its own – but no one else’s – economic traditions. This, he said, took place not via traditional EU decision-making channels, the so-called “community method”, but via the “self-empowerment” of the European Council – where EU leaders meet.

Looking ahead, he warned that Berlin’s technocratic, intergovernmental approach – which “treated national governments and citizens like underage children” – had diminished the appetite for closer European integration.

It was essential to work against this, he argued, by shifting away from austerity politics towards stimulus measures. Prof Habermas dismissed German concerns that the pace of reform would slow in crisis countries as a result.

“The technocratic evasive manoeuvres tried to date . . . have not proven much more effective,” he noted.

He said there were good reasons to demand greater European integration, but that citizens in member states would always reject this without being presented with greater democratic control. Berlin’s “closed-door . . . technocratic” approach in the crisis had increased Germany’s influence in the EU, he said, but also built up huge resistance against Berlin. “The federal government has played out a hegemonic position in Europe and . . . has created an explosive situation,” he said.

Separately a new study has dismissed as a myth the claim that decade-old German economic and social reforms, held up as a model for crisis countries, were behind Germany’s own rapid recovery.

The study, to be published next week by the Journal of Economic Perspectives, said the reforms “were not central or essential in the process of improving the competitiveness of German industry”.

Autonomous wage-setting
Labour unit costs were already dropping – and competitiveness rising – long before Germany’s 2003 reforms. Instead the report’s four authors, three of whom are German-based economists, gives credit to Germany’s autonomous wage-setting practices and the ability of social partners to react quickly, at regional level, to changed economic circumstances.

The report warns against using Germany’s reforms as a template in countries with often very different structures. Instead the economists recommend following Germany’s example in “decentralising bargaining to the firm level” to improve wage flexibility and ensure that “employees benefit again when economic conditions improve”.