‘I shall wear the creditors’ loathing with pride’, Varoufakis says in statement on blog

The Greek Finance Minister refuses to comment as leaves home for the finance ministry after resigning his post. Video: Reuters 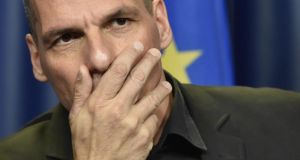 Former Greek finance minister Yanis Varoufakis: “The superhuman effort to honour the brave people of Greece, and the famous oxi (no) that they granted to democrats the world over, is just beginning.” Photograph: Getty Images/AFP

Greek finance minister Yanis Varoufakis has stepped down, saying in a statement on his blog that some of the negotiating partners had sought his “absence” from talks:

“The referendum of 5 July will stay in history as a unique moment when a small European nation rose up against debt bondage.

Like all struggles for democratic rights, so too this historic rejection of the Eurogroup’s 25 June ultimatum comes with a large price tag attached.

It is, therefore, essential that the great capital bestowed upon our government by the splendid no vote be invested immediately into a yes to a proper resolution – to an agreement that involves debt restructuring, less austerity, redistribution in favour of the needy, and real reforms.

Soon after the announcement of the referendum results, I was made aware of a certain preference by some Eurogroup participants, and assorted “partners”, for my … “absence” from its meetings; an idea that the prime minister judged to be potentially helpful to him in reaching an agreement. For this reason I am leaving the ministry of finance today.

I consider it my duty to help Alexis Tsipras exploit, as he sees fit, the capital that the Greek people granted us through yesterday’s referendum.

And I shall wear the creditors’ loathing with pride.

We of the left know how to act collectively with no care for the privileges of office. I shall support fully Prime Minister Tsipras, the new minister of finance, and our government.

The superhuman effort to honour the brave people of Greece, and the famous oxi (no) that they granted to democrats the world over, is just beginning.”