Greece says it is unable to deal with refugee crisis 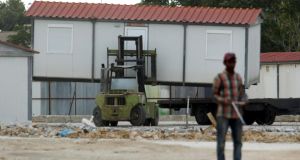 Greek prime minister Alexis Tsipras has asked Europe to help in handling tens of thousands of refugees coming from Syria, Afghanistan and other war zones, saying yesterday his cash-strapped country could not deal with them alone.

The influx has piled pressure on Greece’s services at a time when its own citizens are struggling with harsh cuts and its government is negotiating with the EU and the IMF for fresh loans to stave off economic collapse.

Migrants arriving every day had triggered a “humanitarian crisis within the economic crisis”, Tsipras said after a meeting with ministers.

“The EU is being tested on the issue of Greece. It has responded negatively on the economic front – that’s my view. I hope it will respond positively on the humanitarian front.”

The comments came as the United Nations refugee agency (UNHCR) called on Greece to take control of the “total chaos” on Mediterranean islands, where thousands have landed.

About 124,000 have arrived this year by sea, many via Turkey, according to Vincent Cochetel, UNHCR director for Europe.

“The level of suffering we have seen on the islands is unbearable. People arrive thinking they are in the European Union.

“What we have seen was not anything acceptable in terms of standards of treatment,” Mr Cochetel said after visiting the Greek islands of Lesbos, Kos and Chios.

“I have never seen a situation like that. This is the European Union and this is totally shameful.”

Meanwhile, Hungary’s government has pledged to work “at full steam“ to complete a razor-wire fence to keep out immigrants. Prime minister Viktor Orban has given the army until the end of this month to finish it.