Greece Q&A: What has been agreed and what next? 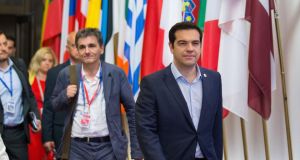 Has an agreement on a new bailout package for Greece been reached?

Technically, no. Euro zone leaders agreed this morning to consider backing a third bailout, if certain conditions are met. As Enda Kenny put it, leaders agreed on “the basis for a third agreement for Greece,” though the fact that leaders have given political backing to the concept of a third bailout constitutes progress. The agreement reached this morning also gives political cover to the European Central Bank to keep propping up the Greek banks with emergency funding if it so wishes.

What conditions now have to be met for a third bailout to be sanctioned?

Firstly, the Greek Parliament must pass a number of measures by Wednesday, including the streamlining of the VAT system and broadening of the tax base. Then the eurogroup will probably meet again before the end of the week to assess if the measures have been implemented, and to mandate the EU institutions to start negotiating a new Memorandum of Understanding between Greece and its creditors. Crucially, any decision to sign up to negotiations on a third bailout by the eurogroup would need parliamentary approval by a number of countries. There are suggestions that the German Bundestag could be recalled on Thursday.

If all goes to plan is Greece out of the woods?

No, there are other factors at play. In parallel to talks about a third bailout, separate decisions will have to be taken about Greece’s short-term financing needs and the dire situations of the banks which are now estimated to need €25 billion in capital. While EU leaders have said that Greece needs about €80 billion, they also note that the country needs to pay back more than €12 billion to the ECB by mid-August, and pay its arrears to the IMF. This question of “bridge financing” for Greece will be discussed at today’s meeting of euro zone finance ministers. With Greek banks still closed, crucially the ECB must decide whether to increase its provision of emergency liquidity assistance. A decision is expected later today. Even if ELA is increased, it is likely that capital controls will be maintained for weeks or months, amid fears that the re-opening of the banks would see a full-scale bank run.

Is there anything new in the proposal?

From the Greek perspective very little has changed in terms of the reform measures being demanded by creditors. One new aspect of the latest proposal is a €50 billion fund, which will hold valuable Greek assets that will be either sold off or managed to generate up to €50 billion. €25 billion of this will be used for recapitalising banks, with half of the remaining 50 per cent used for debt reduction, and the remaining funds used for investment in Greece. Unlike a previous suggestion by Germany that the fund would be managed by a Luxembourg-based fund, it will be based in Greece.

What about debt relief for Greece?

The final statement this morning on the summit is unequivocal: “the euro summit stresses that nominal haircuts on the debt cannot be undertaken,” a position echoed by German chancellor Angela Merkel at her post-summit press conference.

The statement also notes that “member states have, throughout the last few years, adopted a remarkable set of measures supporting Greece’s debt sustainability.” Officials have stressed that, as repeated throughout the last few months, an agreement that dates from November 2012 which suggests that some debt reprofiling may be considered for Greece is all that can be considered.

Why did the negotiations take so long?

Crucially, the summit saw a number of ‘break out’ sessions where German Chancellor Angela Merkel, French President Francois Hollande and the Greek Prime Minister and his advisor thrashed out the details of the agreement, with European Council president Donald Tusk presiding. In total three ‘mini-summit’s’ took place last night in Mr Tusk’s office. Mr Tsipras was in frequent phone contact with Athens throughout the night, while the IMF’s Christine Lagarde was in and out of the meeting at various points. A number of Prime Ministers, including the Italian and Slovenian prime ministers voiced frustration at being detained in Brussels, when the decisions were being made in another room.

Among the most contentious issues was the question of IMF involvement in the programme, though the fund’s continued participation was agreed relatively early in the negotiations last night. More contentious was the €50 billion fund. While Germany was in favour of using the total €50 billion to address debt reduction, Alexis Tsipras pushed for more money to be dedicated to investment.

According to one source, the negotiations almost broke down at around 6 am over the fund issue, before Tusk ordered all the leaders to stay in the room until an agreement was reached.

The final agreement was then brought back to the leaders where it got the final sign off.

1 Bobby Storey: The IRA's planner and enforcer who stayed in the shadows
2 Covid-19: Travel restrictions unlikely to be lifted before July 20th
3 Transgender Cork farmer (65) surprised at positive response to telling her story
4 Q&A: How close are we to having a Covid-19 vaccine?
5 Miriam Lord’s Week: Martin sparks Olympian levels of whingeing in Fianna Fáil
Real news has value SUBSCRIBE