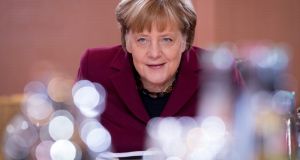 German chancellor Angela Merkel has warned of the danger of blowing out of proportion the security threat posed by asylum seekers. Photograph: Kay Nietfeld/EPA

The new fund is just one point in a major deal to recalibrate competences and finances between Berlin’s federal government and its 16 states. After months of disagreement on countless points, all politicians in Berlin’s chancellery were in agreement: the need to adjust the “welcome culture” that resulted in almost 900,000 asylum requests last year.

Germany is now working to reposition itself, announcing round-the-clock border checks this week on three motorways from Austria into Bavaria.

Bavarian interior minister Joachim Hermann, who said some 4,700 people have been turned back on the border since July, welcomed the new, permanent checks as “very, very important to reduce the illegal entry flow and make Germany even more secure”.

Islamist attacks in Bavaria over the summer and a series of sexual assaults on German women, some involving migrants, have seen a cooling off of public opinion in Germany towards migrants.

Under growing pressure from her Bavarian allies and conservatives within her own Christian Democratic Union (CDU), and with an eye on a fourth term election bid next year, Dr Merkel signalled earlier this week that she would not allow a repeat of the 2015 refugee crisis. But she has warned, too, of the danger of blowing out of proportion the security threat posed by asylum seekers, or of making sweeping statements – not backed up by facts – about criminal foreigners.

Police say attacks by asylum seekers against Germans are negligible compared to the spiralling attacks against refugee accommodation and mosques.

On Friday police arrested a 29 year-old man reported linked by DNA evidence to a September attack on a Muslim prayer complex in Dresden. The explosive device blew the door off the hinges but left unharmed the imam and his family, who were inside at the time.

According to media reports the man had previously spoken at a demonstration organised by the anti-Islam group Pegida, which marches each Monday night through the Saxon capital.