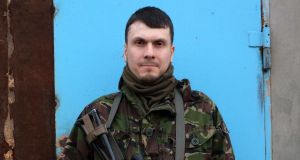 In his own Wycliffe days, Adam Osmayev was like the lads pictured on the school website, enjoying mucking around in camouflage, going for long hikes and camping in the woods and hills, and learning to navigate and fire a rifle.

The Chechen boy could not know how those skills would serve him as a man, or foresee his strange journey to the place where he now puts them to full use.

He is speaking in a former hotel in Lysychansk, an industrial city in eastern Ukraine that was decrepit even before tank and artillery fire ravaged it last summer, when government forces drove out separatist militants.

With weapons, volunteers and apparent direct military support from Russia, the insurgents have fought back and are now just 15km from Lysychansk.

The hotel is the base for Osmayev’s sabotage unit, which goes deep behind enemy lines in Donetsk and Luhansk regions to attack rebel positions and guide army artillery fire.

A fractious ceasefire has brought a lull to fighting, allowing Osmayev’s battalion to rest, train and hone plans for the defence of Lysychansk, but few on either side of the conflict expect the truce to last long.

“We can gather a few hundred guys if we need to, but our regular missions involve groups of just 9-13 people,” Osmayev says as his men move around the impromptu mess hall, making coffee and taking food provided by volunteers.

“The Ukrainian army doesn’t have many people who do what we do, and our success rate is very good. We have had only one fatality.”

The man killed was Isa Munayev, a former senior Chechen rebel commander, who fled his homeland a decade ago as Russian forces and their local proxies brutally crushed the Caucasus republic’s drive for independence.

Munayev found refuge in Denmark, but when Russia annexed Crimea and fomented an insurgency in Ukraine last year, he travelled to the embattled country to create what he called an international peacekeeping battalion of volunteers.

Munayev named the unit after Dzhokhar Dudayev, Chechnya’s leader during de-facto independence in the early 1990s, and commanded it until he was killed on February 1st while fighting in Chernukhino, near the strategic town of Debaltseve.

“He told me to stay in Debaltseve and find a good location for a base, and to collect him after the mission,” Osmayev recalls.

“It was the only time he left me behind.”

Osmayev was chosen to assume command by a battalion he says is mostly Ukrainian, but comprises volunteers from Georgia, Azerbaijan and Russia, including “dozens” of Chechens who fought Moscow’s troops in their homeland.

He admits it is a heavy responsibility for a 33-year-old whose first mission came only on November 21st, the day after he joined the battalion and just two days after he walked free from an Odessa jail where he had spent nearly three years.

Osmayev was arrested in the Black Sea port in early 2012, on suspicion of plotting with two other men to blow up Putin on the orders of Chechen rebels.

He claims he helped the men find a place to rent in Odessa and, when he was visiting their flat one day, something they said they were “experimenting with, maybe fireworks” burst into flames. One man died in the fire, the other was injured and quickly arrested, and Osmayev laid low while receiving treatment for burns.

Osmayev says he feared arrest because he had been wrongly accused in 2007 of plotting to kill Kremlin-backed Chechen leader Ramzan Kadyrov, who had clashed with Osmayev’s father and sacked him from a top job in the region’s oil business.

Several of Kadyrov’s opponents have died in mysterious circumstances far from Chechnya. Kadyrov denies involvement, but Osmayev and his father moved from Russia to Ukraine in the hope of avoiding a similar fate.

Osmayev insists the case was a Russian set-up, but only intervention from the European Court for Human Rights stalled his extradition to Russia, and he remained in pre-trial detention as a pro-western revolution roiled Ukraine last winter.

When its Moscow-backed authorities were ousted, Kiev’s new prosecutor general quashed Osmayev’s attempted murder charge and he was freed, with a conviction for handling explosives that he says the court upheld just to save face.

Though he spent seven formative years in England – getting four good A-levels and going on to study business economics at Buckingham university – Osmayev says he always felt strongly Chechen, and knew his nation’s long history of persecution by Russia.

Osmayev believes hundreds of Chechens, many with combat experience in the region’s two recent wars with Russia, are ready to fight for Kiev if they are offered Ukrainian citizenship and assured they will not be prosecuted.

“They want to fight for the Chechen cause, which is also the Ukrainian cause and the European cause,” he says.

“If Ukraine is strong and free it can change Russia, and bring freedom to Chechnya in some years.”

Osmayev was far from abstemious while in England, but he is now a practising moderate Muslim, who argues that young Chechens angered by “injustice” should be able to fight legally under Ukrainian military control, to reduce the lure of extremist groups like Islamic State that seek to “brainwash” them.

“All Russia’s talk about there being fascists and persecution of Russian speakers here is absolute rubbish,” says Osmayev, over the clack of a rifle being cleaned and checked in an adjoining room.

“This is a fight for freedom against totalitarianism. Putin wants to take Russia towards North Korea, and Ukraine wants to move to the western, free world.”

Osmayev believes Nato weapons — particularly anti-tank missiles like the US Javelin – could quickly and relatively cheaply tip the conflict in Ukraine’s favour; but he fears that western leaders lack the stomach for such confrontation with Putin.

“Neville Chamberlain did a lot for Britain, but he’s remembered only for showing weakness when he needed to show resolve against Hitler,” Osmayev says.

“Current leaders shouldn’t follow his path, but it seems they are.”

Osmayev dreams of running a big agricultural company in Ukraine once the conflict is over, and speaks of its prospects like the well-educated former businessman that he is.

But first he and Ukraine have to fight, and win.

“It could take years, but not if the West helps. Even if Putin takes Kiev he will never take the whole of the country,” Osmayev says, buttoning up a camouflage jacket that is, of course, British army surplus.

“I’m willing to defend Ukraine, and to free this Donbas region and Crimea. If Putin sends his whole army and we have to fight in the west, in the Carpathian mountains, then we will use guerrilla warfare — Putin cannot beat us.”

1 Hand sanitiser used in some schools can cause headaches and respiratory problems
2 US presidential debate: who won, was it any good, were there any surprises?
3 Nine charged following clashes between gardaí, anti-lockdown protesters
4 Sleeping father was unaware partner and baby dead until gardaí called to raise alarm
5 Two hundred Irish retailers for all your online Christmas shopping
Real news has value SUBSCRIBE