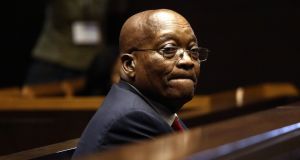 Former South African president Jacob Zuma: Legal experts estimate he is liable for fees of up to at least €2 million. Photograph: Phill Magakoe/AFP/Getty

Former South African president Jacob Zuma must return the equivalent of at least €1 million to the state after a court ruled that he illegally used taxpayers’ funds to defend himself against corruption and fraud cases.

On Thursday morning the North Gauteng high court ruled that a 2006 agreement signed with Mr Zuma by the then president, Thabo Mbeki, stipulating that the state would pay the legal fees Mr Zuma incurred in his personal capacity, was unlawful and illegal.

“It is declared the state is not liable for the legal costs incurred by Mr Jacob Zuma in his personal capacity, in criminal prosecutions instituted against him, in any civil litigation related or incidental thereto, and for any other associated legal costs,” Judge Aubrey Ledwaba said.

The court also ordered the state attorney’s office to compile within three months a complete record of all the legal fees Mr Zuma has incurred to date, and use whatever means are necessary to recover the funds that he owes.

In the months’ leading up to Thursday’s judgment, the presidency confirmed it would abide by whatever ruling emerged.

Legal experts have estimated that Mr Zuma, who was replaced as South Africa’s president in February in part because of numerous corruption charges pending against him, is liable for legal fees of between €1 million and €2 million at least.

Since 2009, when he first became president, Mr Zuma has been fighting in court efforts by the opposition Democratic Alliance (DA) to have bribery, fraud and racketeering charges linked to a multibillion-euro government arms deal reinstated against him.

The National Prosecuting Authority (NPA) dropped those charges shortly before he became president, saying they were politically motivated.

However, following a 2017 high court ruling that said the NPA’s decision to drop the charges against Mr Zuma was irrational, 16 arms-deal-related corruption charges were reinstated against him in April this year.

In May, Mr Zuma dispensed with his longstanding legal team because he could no longer afford their services, so whether he has the funds to pay back the state remains to be seen.

Thursday’s case was taken by the DA in March after President Cyril Ramaphosa revealed the existence of the 2006 agreement when explaining why the state would continue to pay the former president’s legal fees going forward, even though he was no longer in office.

DA leader Mmusi Maimane welcomed Thursday’s court ruling, saying “the system of corruption where those who loot the state are then able to defend themselves using public money has been stopped today”.

Mr Zuma is also under investigation at the commission of inquiry looking into public sector corruption for allegedly accepting bribes in return for using his political influence while president to enrich a South African business family.