French urged ‘to continue to live normally’ after three attacks 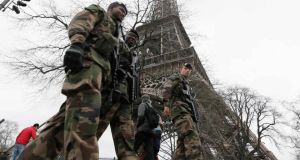 French soldiers patrol near the Eiffel Tower in Paris as part of the ‘Vigipirate’ security plan. Photograoh: Gonzalo Fuentes/Reuters

After a string of attacks across France that have reinforced concerns about Islamic militancy, prime minister Manuel Valls acknowledged that the French were “worried by these shocking images” but urged them “to continue to live normally”.

French security officials say they have not established any direct links between the attacks in the central town of Joué-lès-Tours on Saturday, in Dijon on Sunday and in Nantes on Monday. In Dijon and Nantes, more than 20 people were wounded after two men drove a car and a van into crowds of people, with one of the drivers shouting an Islamic rallying call.

The authorities depicted both drivers as mentally unstable. In Joué-lès-Tours, a man (20) entered a police station while wielding a knife and attacked three officers before another shot and killed him.

The episodes raised fears that militants acting alone may have decided to stage attacks on French citizens in response to their government’s support for the US-led air campaign against jihadis in Syria and Iraq. The attacks followed bloody episodes ascribed to so-called lone wolf assailants in London last year and in Sydney last week.

Security concerns in France and elsewhere have been heightened by the radicalisation of thousands of Europeans who have travelled to Syria and Iraq to join the Islamic State, which seeks the establishment of an Islamic caliphate in Syria and Iraq.

On Monday, Valls said: “Never have we faced such danger in matters of terrorism. We have over 1,000 individuals who are involved in jihad and Syria and Iraq.”

But, speaking on Europe 1 radio today, he said: “The best answer is to continue to live normally, with the necessary vigilance of course.” French officials have drawn clear distinctions between the three attacks. The interior minister, Bernard Cazeneuve, told reporters in Nantes that the attack in that city, where a man drove a van into a crowd of pedestrians at a Christmas market, was “in all likelihood the act of an unstable person”.

In Dijon, the city’s prosecutor, Marie-Christine Tarrare, said at a news conference that the driver who rammed into pedestrians was a 40-year-old French citizen of Algerian and Moroccan descent who had “serious and long-established psychiatric issues” and who had been treated for such problems on 157 occasions.

“His motivations are quite vague and hardly coherent,” Ms Tarrare said of the driver, who has been arrested. In Joué-lès-Tours, a suburb of Tours, in central France, prosecutors identified the knife-wielding assailant as Bertrand Nzohabonayo. He was an immigrant from Burundi and the elder brother of Brice Nzohabonayo (19), who was being monitored by the French security services because of his radical Islamist views.

“Brice was being monitored since August 2013, when their mother reported that she was worried about her son’s radicalisation and the influence he might be having on Bertrand,” the Paris prosecutor, François Molins, said at a news conference on Monday.

Bertrand Nzohabonayo had taken the name Bilal on a Facebook page and had posted an image of the black flag of the Islamic State, Mr Molins said. Their sister, who was detained on Saturday and then released by the French police, said the family was originally Catholic. She said Bertrand converted to Islam when he was 16 or 17 and quickly became radicalised.