Code of silence prompted perhaps by a collective guilty conscience, and fear of strengthening the extreme right-wing National Front 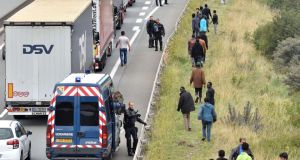 French riot police stand on the side of the road to prevent migrants from approaching lorries on the road leading to the ferry port in Calais, northern France. Photograph: AFP Photo

Thousands of migrants from the Middle East and Africa live in makeshift encampments in Paris, Calais and elsewhere. The migrant crisis created tensions this summer between France and her Italian and British allies.

Horrors such as the deaths of 71 migrants in the lorry found in Austria on Thursday, and the more than 30 corpses found in the hold of a boat off Libya on Wednesday, are widely covered by French media.

Yet the French public and political class practise a sort of omerta regarding the migrants, prompted perhaps by a collective guilty conscience, and certainly by fear of strengthening the extreme right-wing National Front.

An IFOP poll in April showed that two-thirds of the French oppose welcoming migrants to their country. On August 27th, a demonstration in support of refugees who’ve been living for months in tents under Paris’s Austerlitz bridge, and who are scheduled to be expelled in mid-September, drew only 100 protesters.

The socialist government’s slogan of “humanity and firmness,” summarises its passivity and desire to please everyone.

Jean Jaurès, the founder of the socialist party, would not have accepted it ignoring such an important human cause, the socialist historian Alain Bergounioux harangued a high level meeting. On August 21st, Bergougnioux reportedly pleaded with president Francois Hollande to “fight for values” and seek a leading role on migration policy in Europe.

Yet in his annual foreign policy address four days later, Hollande noted that European efforts to save refugees from drowning “led more and more migrants to cross the Mediterranean.” He continued to hide behind Europe, calling for a meeting of the EU Council to discuss joint Franco-German proposals.

It was significant Libération newspaper devoted five pages, including its cover, to the migrant crisis on Friday, yet only one sentence concerned French policy, and that regarded Paris’s desire to see “hot spot” centres established in Greece and Italy to filter war refugees from economic migrants – and send the latter back to their countries of origin – before they reach France.

Libération’s editor Laurent Joffrin contrasted “the apathy or hard-heartedness of a part of the European political class” - he did not mention France -- with the generosity of Chancellor Angela Merkel. “One leader, fortunately, is saving the honour of the European Union: Angela Merkel,” Joffrin wrote. “The reaction of the Chancellor to the unbearable tragedies occurring on the borders of Europe is a lesson in humanity that we must reflect on.”

France is in a sense fighting the previous battle by demanding the designation of “safe countries of origin” – mainly the countries of former Yugoslavia – whose citizens would be ineligible for asylum. Fabrice Leggeri, the Frenchman who heads Frontex, the agency responsible for patrolling Europe’s borders, says the flow of Albanians and Kosovans has nearly dried up.

French calls for a single European policy and “fair distribution” of migrants evaporate in the face of events. When some 100 Africans were stranded at Italy’s border with France in June, France turned them back, increasing the burden on Rome and Milan.

And the entente cordiale was severely tested this summer by the crisis at the Channel Tunnel. Xavier Bertrand, a former conservative cabinet minister and candidate for president of the Calais region, accused Britain of making itself a magnet by allowing migrants to work, and threatened to “let them leave” for England. Natacha Bouchart, the conservative mayor of Calais, demanded that Britain open a transit camp for the refugees on its own territory.

Fortunately for France, migrants are so discouraged by the country’s economic paralysis and stultifying bureaucracy that they see it mainly as a transit point en route for Britain, Germany and Scandinavia.