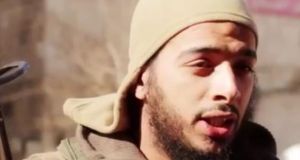 Salim Benghalem (35) is described by French authorities as an executioner, jailer of hostages and the man responsible for supervising French-speaking recruits to Islamic State

Salim Benghalem (35) is described by French authorities as an executioner, jailer of hostages and the man responsible for supervising French-speaking recruits to Islamic State. He was the target of an October 8th air strike near Raqqa, Syria, according to Le Monde newspaper.

The US state department placed Benghalem on its list of 10 “Specially Designated Global Terrorists” in September 2014, saying he was a chief executioner for the group. Benghalem has told family and friends in France, with whom he communicates by Skype, that he is a “policeman” enforcing Sharia.

A report by the internal French intelligence service DGSI confirms that Benghalem “appears to be part of IS’s Islamic police and to participate in the executions and corporal punishments carried out by them”.

A report just leaked by the French department of justice, based on the interrogation of returning French jihadis, provides a vivid description of the activities of the Islamic police. One returnee admitted to having held the head of a prisoner while his throat was slashed in a Sharia punishment. Others told of floggings, amputations, stonings and executions which were filmed on the public square in Azaz.

A former member of the Islamic police said cannabis and cigarette sellers were flogged. Heroin traffickers, homosexuals, rebels and adulterers were executed in the street, where their bodies were displayed for several days with a sign indicating why they had been executed.

Benghalem has been on the French list of wanted terrorists since May 2014. Last summer, he was charged with “kidnapping and sequestration” in the case of four French journalists who were held in Syria from June 2013 until April 2014.

He has also been charged with “incitement to commit terrorist acts” for a video which John Cantlie, still a British hostage, was forced to shoot last February. In the video, Benghalem praised the Paris attacks of January 2015, and urged his “brothers” to become “lone wolves” and to “kill [unbelievers] with knives”.

But L’Express magazine, which contacted Benghalem through his entourage in Paris, reports that he survived the air strike unscathed. “We in Islamic State are the men whom the world wants to kill, but death is our goal,” was the message he transmitted on October 17th.

Benghalem’s wife and two small children joined him in Syria for four months at the end of 2013, before returning to France. His six brothers and sisters are well integrated in France and include a teacher, an accountant, an electrician and a metalworker. “They are devastated and do not want to draw attention to themselves,” said Leon-Lef Forster, who defended Benghalem in the 2000s. Like hundreds of relatives of French jihadis, they are torn between “their ties to him and condemnation of his acts”.

Benghalem’s former friends in Cachan, the Paris suburb where he grew up, describe him as a joker who was not particularly brave. He dropped out of school at age 17 and became a petty thief and drug dealer. Sentenced to 11 years in prison for his involvement in a gang revenge killing, he served only 5½ years.

It was in 2007, towards the end of his stay in prison, that Benghalem came under the sway of his cellmate, Mohamed El-Ayouni. Ayouni had been wounded three times in the 2004 battle of Falluja, Iraq; he lost an eye and one arm.

Ayouni was a childhood friend of Cherif Kouachi, one of the perpetrators of the killings at the office of Charlie Hebdo. When Benghalem was released from prison, Ayouni put him in touch with the remnants of the “Buttes-Chaumont” network from Paris’s 19th district. They had sent a dozen young Frenchmen to fight the Americans in Iraq between 2003 and 2005.

In 2011, Benghalem and Kouachi went to Yemen together for weapons training with al-Qaeda in the Arabian Peninsula. Benghalem emigrated to Syria in April 2013, and was wounded in the leg seven months later. He initially fought with al-Nusra Front, the al-Qaeda affiliate in Syria, but like thousands of others switched to the more violent and better armed IS.

The justice ministry report says that traffickers sometimes disregard the wishes of wannabe jihadis and take them to al-Nusra or another group that is at war with IS. Disillusion with the “fratricidal struggle” between jihadist groups is one of the main reasons for defection.

But since IS began executing deserters, authorities are wary of returnees, for fear they might be “sleepers” determined to carry out attacks on French territory.