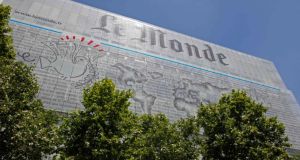 Le Monde yesterday claimed that “all of our communications are spied on”, basing its report on unnamed intelligence sources as well as remarks made publicly by intelligence officials. Photograph: Jacky Naegelen/Reuters

It said the DGSE intercepted signals from computers and telephones in France, and between France and other countries, although not the content of phone calls, to create a map of “who is talking to whom”. It said the activity was illegal.

“All of our communications are spied on,” wrote Le Monde, which based its report on unnamed intelligence sources as well as remarks made publicly by intelligence officials.

The activities described are similar to those carried out by the US National Security Agency, as described in documents leaked by former NSA contractor Edward Snowden.

The documents revealed that the NSA has access to vast amounts of internet data such as emails, chat rooms and video from large companies such as Facebook and Google, under a programme known as Prism. They also showed that the US government had gathered so-called metadata – such as the time, duration and numbers called – on all telephone calls carried by service providers such as Verizon.

Le Monde said the French national security commission whose job it is to authorise targeted spying, and the parliamentary intelligence committee, had challenged the paper’s report and said it worked in accordance with the law. It said the only body that collected communications information was a government agency controlled by the prime minister’s office that monitors for security breaches.

Trade talks
Le Monde’s report comes amid a storm over media allegations that Washington regularly spies on European citizens and embassies. The allegations, made in the German magazine Der Spiegel, sparked concern from data protection watchdogs and irked European governments just as major transatlantic trade talks are about to start.

Le Monde said France’s DGSE was more interested in finding out who was speaking to whom than in combing through the content of private communications. The DGSE stored a mass of such metadata in its Paris headquarters basement, it said.– (Reuters)