Cargo jet came down near Seville airport in southwest Spain 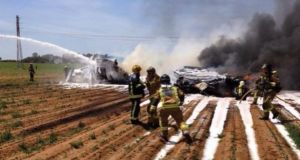 It is believed there were 8-10 people on board the crashed plane. 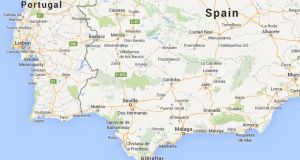 Four crew members were killed and two others seriously injured when a military transport plane crashed near Seville airport in south-western Spain on Saturday.

The crash of the Airbus A400M, which was undergoing flight trials at the airport, raised questions about the security of the brand new aircraft.

Spanish prime minister Mariano Rajoy was the first to confirm the crash, offering his condolences to the families of the all-Spanish crew. He later visited the families in Seville and said the crash was a blow to an industry that was important to Spain — and to Europe.

“I hope there will be maximum transparency when explanations are made as to what happened here. That’s what I’m going to ask of Airbus,” Mr Rajoy said.

Airbus said in a statement that four of the six crew members on board died in the accident. The two others are currently in hospital in a serious condition, it said.

James Darcy, a spokesman for Airbus in the US, said it was the first crash involving the large, propeller-driven transport aircraft since it first entered service with the French air force in 2013.

He said Airbus Defence and Space has been ramping up production of the plane “as part of the normal planned growth for the programme”. The target for this year is 14 aircraft, up from eight last year, he said.

Seville is the final assembly point for the A400M. Some 194 aircraft have been ordered by eight countries — including Spain — to replace their ageing Hercules fleets.

Britain’s Ministry of Defence said it was suspending the use of the Airbus A400M after the crash.

It said use of Britain’s two A400Ms had been “temporarily paused” as a precaution.

A spokeswoman for Spain’s interior ministry at the scene of the crash told the Associated Press that the two crew members who had been rescued alive had been taken to a hospital in Seville — one suffering from a head injury but still conscious and the other with serious burns.

Airbus said the plane that crashed was scheduled to be delivered to Turkey in June as the country’s third such aircraft.

Spain’s air traffic controllers said on their Twitter account that the pilots had communicated just before the impact that a fault was affecting the flight. The crash happened a mile north of Seville airport, they said.

Spain’s airport authority, Aena, said Seville airport had been closed for just over an hour and a half as its fire crews attended the plane crash outside its perimeter fence. Three incoming flights to Seville were diverted to Malaga and Jerez airports, Aena said.

The crash also knocked out power at an industrial estate in the suburb of Carmona, Aena said.

The controllers said one of the flights diverted to Malaga was a transport plane used to deliver aircraft parts for assembly. It had been flying in from an Airbus facility in Hamburg, Germany.