Food banks: the dirty secret of the Merkel era 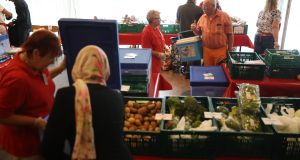 A crowd is gathering on the steps of a severe 1970s concrete block that, according to the weathered sign, is a Lutheran church and community centre.

We’re in Mariendorf, a southern Berlin suburb far from the tourist trail, and older people and families with children shuffle up the steps and into a gloomy hall. They wait and chat — in German, Russian and Arabic — about everything but politics.

After three terms and 12 years in power, Angela Merkel hopes to secure a fourth term on September 24th by taking credit for steady economic growth of 1.6 per cent and unemployment halved to 2 million or four per cent. But if Germany is booming, why are its food shelters booming, too?

“That is a question I ask myself every week,” says Katrin Funke, an energetic middle-aged women in a hall lined with tables bearing dozens of green plastic crates. Inside the crates are fruit and vegetables, yoghurts and crusty bread — all donated by supermarkets happy to save on the cost of food disposal.

“Sometimes we get organic filet steak,” says Funke. “It’s crazy but, with online shopping, retailers have to get rid of food earlier and earlier before the best before date.”

The Mariendorf centre is part of a network of so-called “Tafel” food banks. The first Tafel centre opened in 1993 and the number of visitors has tripled to 1.5 million since 2005, alone: the dirty secret of the Merkel era.

Funke and her dozen red-vested volunteers, the oldest more than 80, have never been busier, correcting the growing imbalances in German life. The biggest growth area in visitors in the last years, says Funke, are among refugees and older people.

The take-up has spiked in the 15 years since Germany introduced radical economic and welfare reforms.

Today more people have jobs than at any time since unification, but only 59 per cent have a “traditional” job, while the rest are temporary or “mini-jobs” and 9 per cent of workers have more than one job to make ends meet.

Though Germany is one of the world’s most prosperous countries almost 16 per cent of the population (13 million people) are now classified as relatively poor, living on less than 60 per cent of the median income. When Angela Merkel took office in 2005, in an economic crisis, it was lower: 14.7 per cent.

“Economic development no longer has positive effect to drive down poverty,” said Ulrich Schneider of the Paritätische Gesamtverband, a lobby group for German charities.

It estimates that 40 per cent of Germans are now cut off from the economic boom. Government poverty reports only make the news when ministries fiddle with the draft to remove unwanted findings from the final version.

‘Supposed to be a stop gap’

It’s 2pm now and the Mariendorf entrance hall is getting crowded. By day’s end around 300 people will have come through the doors. While people wait, some sit quietly in the chapel, others check out the clothes bank and shelves of books.

A small girl from a Syrian family walks around proudly holding a book called “When the cock crows.”

The volume rises but the mood is calm. No one shows up here on spec, everyone is registered as needy.

Like Wolfgang, a 74-year-old engineer forced out of his trade by an accident. Now he tops up his pension by working as a security guard for €7.85 an hour — almost a euro below the minimum wage — at a state-run music school.

“Facilities like this here were supposed to be a stop-gap but now the welfare office tells people like me to come here,” he says. “It’s outrageous how it’s fallen to private, volunteer initiatives to fill the gaps in Germany’s welfare state.”

The visitors are called individually into the hall and handed a laminated, colour-coded card depending on the side of their household. If they are a one-person household they pay €1, or €2 for two adults. Children are free. Then they make their way around the tables, collecting what they need.

Waiting her turn in the adjacent cafe is Maya, a regular since she plucked up the courage to come a year ago.

“I don’t really know why I’ve ended up here, I worked all my life as a geriatric carer,” said the 68-year-old, drinking a coffee and eating a doughnut. “You hear that our state coffers are well-filled but it’s depressing how empty my fridge is at month’s end. I don’t know what I’d do without this here.”

‘Our state has given up on us’

To get away from the noise and scramble inside, Peter has stepped outside to puff on his e-cigarette. He used to work in Berlin’s parks service until 12 years ago, when it fell victim to budget cuts after massive property speculation by city politicians.

Unemployed ever since, he lives like many here on Germany’s basic €409 a month welfare payment, which translates into €200 after fixed costs.

With his ruddy complexion, Peter looks a decade older than his 56 years and is pessimistic about Germany’s future.

“Wages keep being squeezed further by companies that tell politicians, ‘we’re out of here unless you dance to our tune’,” he says. “Our state has given up on people like us.”

Nearby, filling his bicycle saddle bags with food, is Kai, who describes himself as a “an old commie”.

Given Germany’s growing number of working poor, why do people keep voting for Angela Merkel?

“I think we Germans are a tough bunch to teach,” he laughs, cycling off down a road cluttered with massive election posters.

One shows Angela Merkel wearing a benevolent expression, beside the slogan “So that our country stays on a path to success.”

- 39 per cent of visitors are welfare recipients

- 26 per cent of visitors are asylum applicants