The poet, who died 150 years ago this week, retains significant influence and allure 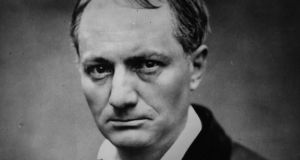 If Charles Baudelaire had lived a century-and-a-half later, I suspect he would have been a rock star. A tormented genius, like Janis Joplin, Jimi Hendrix, Kurt Cobain or Amy Winehouse, consumed by the flame of his creative passion.

Baudelaire looked the part. A self-proclaimed dandy, he dyed his hair green, was clean-shaven when beards were the fashion, and squandered much of his inheritance on satin and velvet clothes.

Baudelaire died 150 years ago this week, at the age of 46. Many of his verses have since entered common parlance. “I have more memories than if I were a 1,000-years-old,” says the opening line of his poem Spleen. His Invitation to the Voyage is quintessentially romantic: “My child, my sister/Imagine how sweet/To live there as lovers do!” So too is the wistful homage in To a Passerby to a woman whose eyes met his on a busy boulevard: “Oh you who I would have loved, oh you who knew it!”

TS Eliot paid Baudelaire the compliment of stealing the last line of the introduction to Flowers of Evil, Baudelaire’s best-known volume, for The Waste Land: “You! Hypocrite lecteur! – mon semblable, – mon frère!”

Arthur Rimbaud called Baudelaire “the king of poets, a true God”. Proust labelled him “the greatest poet of the 19th-century”. His poems routinely appear on the baccalauréat school examination.

Yet when Flowers of Evil was published 160 years ago, the book was censored and the poet was fined heavily for “immorality”. The verdict was not overturned until 1949.

Baudelaire’s working title for the volume had been Lesbians. The poems are about sex and death, drugs and despair. Some still have the power to shock, like Baudelaire’s description of sex with a vampire: “When she had drained the marrow out of all my bones/When I turned listlessly amid my languid moans/To give a kiss of love, no thing was with me but/A greasy leather flask that overflowed with pus!”

Like his close friend, the painter Édouard Manet, Baudelaire embodied the transition between classicism and modernity – a word he is credited with coining. He also made the English word “spleen” a synonym for melancholy in France. It was the feeling inspired in him by the vast ruins and construction sites of Haussmann’s Paris.

Not unlike ageing people in the face of our digital revolution, Baudelaire was ambivalent about the technological advances of his day, such as daily newspapers and electricity.Though he dismissed photographers as “failed painters”, the photographer Nadar was one of his best friends.

Baudelaire joked that the “right to self-contradiction” should be included in the rights of man. From the earliest age, he wrote: “I felt in my heart two contradictory emotions: the horror of life and the ecstasy of life.”

Baudelaire sat more than a dozen times for his portrait, making him the most photographed writer of the 19th-century. He described photography as a form of idolatry and paganism, but he handed out business card-size photographs of himself, and begged his beloved mother to sit for a photographer too.

Baudelaire’s own father died when he was six-years-old. He spent a blissful two years with his mother before she remarried Gen Jacques Aupick.

Jean-Paul Sartre once wrote that Baudelaire destroyed his own life to create a sublime oeuvre. Like Baudelaire, Sartre’s widowed mother remarried. Sartre said he always wrote “against my stepfather”. Baudelaire brandished a rifle on the barricades in the 1848 revolution, shouting: “Death to General Aupick.”

Baudelaire received his father’s inheritance at the age of 21. For two years, he lived lavishly. Then his family obtained a court-appointed guardian, who put the poet on a starvation allowance. For the remainder of Baudelaire’s short life, he begged for money from his mother, friends and publisher. He constantly fled creditors, living at some 40 different addresses in Paris.

Baudelaire and Duval both suffered from syphilis and addiction to laudanum – the opioid of the time. Their stormy relationship was marked by countless break-ups and reunions.

The date of Duval’s death is not known, but she was no longer with the poet when he collapsed from a massive stroke in Belgium in 1866. He was paralysed for the last year of his life and died in his mother’s arms on August 31st, 1867.

Only 20 people attended his funeral. After Baudelaire’s death, his friends learned that the notary who was his court-appointed guardian was in fact sitting on a substantial sum that would have enabled Baudelaire to settle his debts and live comfortably.