Today’s Dresden is a beautiful city showing a confident edge 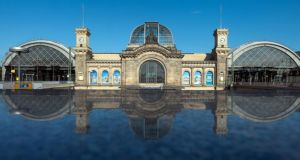 A view of the central railway station in Dresden. The station won the ‘large city station’ category, managing to combine the splendour of past epochs with the demands of modern functionality. Photograph: Arno Burgi/Epa

Look left as you enter the Saxon state parliament in Dresden and you’ll see a round plaque recalling the disaster of August 2002.

A week of heavy rain caused the majestic river Elbe to burst its banks and swamp the Saxon parliament, the train station, the Semper opera house, the Zwinger museum. Priceless cultural treasures were at risk, not to mention a dozen years of expensive rebuilding work since German unification.

This city is no stranger to disaster: in February 1945 Allied bombers obliterated the old town, dubbed “Florence on the Elbe”, killing an estimated 100,000 people. Seven decades after that fateful night the rebuilding work continues – to repair damage caused by that firebomb attack but also the 2002 floods and a second Elbe flood last year.

No matter how bad it got, however, the Saxons refused to go under. Visit Dresden today and you’ll find a beauty more ragged than in the pre-war years, but with a confident edge. Saxony’s second city Leipzig, meanwhile, has been dubbed “Hypezig” as the hipsters and property developers move in, looking for the next Berlin.

His campaign has followed the Merkel method, pitching himself to voters as the embodiment of stability and promising efforts to reduce the 10.5 per cent jobless rate. “We’re a good example of how to do austerity,” he said, “not just running up debts to generate growth but generating growth without debt.”

For a decade Saxony has presented balanced budgets and rivals Bavaria for one of the lowest levels of per capita debt. At the same time some 40 per cent of Saxony’s budget is financed by externals sources: EU funds and the inner-German transfers.

Tillich owes his rise to power in 2008 to the collapse of the state-owned SachsenLB bank, a prominent victim of the banking crisis. It failed after what Germany’s financial regulator called a “shatteringly large discrepancy” between total bank equity and some €40 billion assets managed by its Dublin subsidiary, SachsenLB Europe. A subsequent investigation put considerable blame on the bank’s board in Germany and the bank was sold off, but its debts – €2.75 billion in a worst-case scenario – were left with the Saxon taxpayer.

“Our lesson from the episode is that the state is not the better banker or businessman and now we have just two state-owned concerns, the winery and Meissen porcelain,” Tillich told The Irish Times. “The bitter result is that it is irrelevant that it was Ireland, but it was more attractive to optimise [the bank’s business] there.”

This weekend’s Saxon election is likely to mark the first state parliament debut of the Alternative für Deutschland party. After launching last year as a euro crisis protest party, the Saxon branch has successful shifted to local themes, in particular budget cutbacks that have hit schools and police services.

From last year’s standing start the conservative-liberal AfD has performed well in two elections so far – polling nearly 7 per cent in 2013 federal election, compared to a national 4.8 per cent.

“Saxons are conservative in their mentality but, as eastern Germans, more open to new parties than in the west,” said Uwe Würlitzer, AfD general secretary in Saxony. “Many people support us saying, ‘we didn’t go on the streets 25 years ago for the political system we have now’.” But with slogans like “All power comes from the people” and “Migration needs clear rules”, critics suggest the AfD is trying to scoop up voters at both left and right political extremes by co-opting slogans both from the 1989 revolution and the neo-Nazi NPD.

Tillich dismisses the AfD as a “conglomeration of the discontented” but, with the CDU on 40 per cent in polls, it is likely to require a coalition partner.

Given his ailing coalition partner, the Free Democrats (FDP), Tillich may hook up instead with the Social Democratic Party (SPD), also struggling at just 14 per cent – a striking result in the state where the party was founded in 1869. A final, innovative coalition option with the Greens faces the hurdle of energy policy differences – in particular Saxony’s coal-mining revival. Only two parties don’t figure on Tillich’s coalition dance card. The first is the neo-Nazi NPD, first elected to the state parliament in 2004 and likely to be returned on Sunday amid a heated debate on rising numbers of asylum seekers, up 42 per cent in a year, and border crime issues: car thefts and a growing problem with Czech crystal meth.

“But Tillich’s cutbacks feed an emotional sense of insecurity and play into the far right’s hands.” Back in his office, Tillich doesn’t look like a man who expects to have to clear his desk on Monday evening. Instead he plans to re-establish Saxony as an engineering powerhouse in Europe that builds “the most precise watches and the fastest cars”.

He recalls a leading car executives tell him him that the industrious Swabians, around Stuttgart, feared only one people: the Saxons.

“I told him we would do our best to keep that fear alive,” said Tillich. “Before the war this region was one of the wealthiest and most prosperous in all of Europe and we’re aiming to be that again. We’re not just in this to take part, we’re in this to win.”