Finland and Sweden to bolster ties with Nato 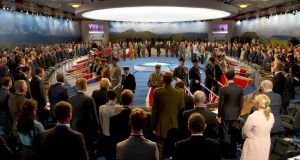 Military members from Nato countries that have had service members wounded or killed during operations hold flags of their nations prior to a moment of silence at the start of the Nato summit. Photograph: Alain Jocard/EPA

With its 1,300km border with Russia, Finland has been particularly worried about potential blow-back of the Ukraine-Russia standoff. Last Thursday a Russian cargo aircraft entered Finnish airspace over the Gulf of Finland for four minutes, the third such intrusion in a week.

The defence ministry published a picture of the aircraft, photographed by the Finnish airforce, while prime minister Alexander Stubb has described the events as “worrying and regretful”.

“This is not the thing neighbours do,” he said. “Three times in a week. We’re of the opinion this was no mistake.”

Mr Stubb, and Sweden’s foreign minister Carl Bildt have both called on their respective countries to join Nato.

Though they say they accept public opposition to membership, they have faced opposition claims the new Nato agreements are part of a push towards full membership.

Finland’s deal with Nato, officially known as a “Host Nation Support memorandum of understanding” provides general guidelines on external assistance. Precise details are to be decided on a case-by-case basis and it doesn’t require either party to give or accept assistance or forces.

Sweden has agreed to sign a similar memorandum, which would see Nato help the country to prepare for training exercises and ease military support in the event of a crisis or conflict.

Moscow has denounced the move as a provocation but Swedish politicians have defended the move, pointing to a growing vulnerability since compulsory military service was abolished in 2010.

Amid concerns over Sweden’s ability to defend itself the conservative-lead government has, with support of the Social Democratic opposition, agreed to buy an additional 60 planes and boost its defence spending.

“With this money we want to increase our presence in the Baltic sea have have longer, more frequent military exercises,” said defence minister Karin Enström.