Failure to tackle terror in France points to sociological solution

Given the war with Isis could take years, French society must look beyond security 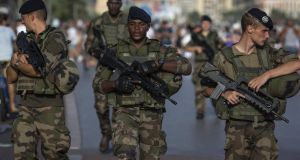 Each time France is attacked by jihadists, the authorities defend themselves with the list of measures already taken: the state of emergency; increases in spending on security forces and intelligence; three anti-terrorist laws which include provisions to stop citizens going to or returning from Syria; shutting down “terrorist propaganda” on the internet . . .

Yet it doesn’t seem to be working.

“The emergency law has failed to stop it,” François Heisbourg of the Foundation for Strategic Research told the New York Times after the Bastille Day massacre.

“The massive use of the military as an auxiliary police has failed to stop it. And now we are going to bomb Raqqa even more, as if that had any particular relevance . . . Do the same thing over and over and expect a different result: the definition of insanity.”

Ordinary citizens question the wisdom of bombing Iraq and Syria.

“The more we attack Syria, the more we’ll be hit with reprisals,” a woman told me at the funeral of Fr Jacques Hamel, who was murdered by jihadists.

Yet despite evidence that hundreds of Arab civilians are being killed by coalition bombing, despite the fact that Islamic State’s territorial losses seem to provoke more attacks in Europe, there is little or no analysis by politicians of the link between military intervention and those attacks.

Worst of all, the bombing is done without long-term vision or strategy regarding the future of Iraq and Syria.

On the domestic front, the sociologist Geoffroy de Lagasnerie and the writer Edouard Louis published a stinging open letter titled Manuel Valls, You have Done nothing against Terrorism in Libération newspaper on Thursday.

The authors recognise the necessity of heightened security measures, but fault French president François Hollande and prime minister Valls for relying solely on “surveillance and repression” in their war with Islamic State (Isis).

Lagasnerie and Louis want the government to address “the causes of political and social violence . . . the structures that engender it . . . the living conditions that instil the desire for destruction in individuals”.

If, as French leaders often say, the war with Isis is likely to last a generation, surely it would make sense to take a pre-emptive, sociological approach to combating jihadism?

The billions of euro the state has spent to improve the Muslim immigrant banlieues are beginning to bear fruit in the form of an emerging Muslim middle class, even as thousands of youths look to radical Islam.

They called on their generation “to assume its responsibilities” and appealed for the revival of a dormant, 11-year-old foundation called the FOIF, which was intended to strengthen moderate Islam in France.

Yet decades of acrimonious debates over headscarves and halal food have strengthened a sense of alienation and discrimination.

A visible increase in veiling is an indicator of greater religiosity. In an April poll, 67 per cent of French respondents blamed Muslims for refusing to integrate.

Since the atrocity in Nice, the socialist government has changed strategy in one important way, shifting from adopting measures advocated by the right – such as the failed attempt to revoke the citizenship of terrorists – to an emphasis on the constitution and the rule of law.

Tensions between left and right came to a head in an overnight parliamentary debate on extending the state of emergency on July 20th.

The conservative deputy, Laurent Wauquiez, accused the government of “protecting the civil liberties of terrorists”.

“The government I head will not lock people up arbitrarily for open-ended periods on the basis of suspicion,” Valls shouted back angrily.

With an eye on his re-election prospects, Hollande now portrays himself as the rampart of the rule of law, protecting the country from the authoritarian drift demanded by the right.

“The question posed is: in what country do we want to live?” he said this week.

“The constitution is the limit.  It is not a ‘quibble’.”

In at least one sense, the government is attempting to address the question of the long term, by announcing the revival of the FOIF.

At present, only 20-30 per cent of imams in France are French citizens.

Most are Turkish, Algerian or Moroccan, and many do not speak French or understand French culture.

Not surprisingly, they have failed to connect with young French Muslims.

The authorities find themselves in the paradoxical situation of trying to promote a “French Islam” that accepts secularism, while fighting radical Islamists. The delineation is often unclear.

The government wants the FOIF to oversee the construction of mosques and the training of imams, but it is hampered by the 1905 law on separation of church and state, which forbids government funding for religious undertakings.

Valls’s hint that the law might be re-examined was quickly denied by Hollande.

The president and prime minister agree that foreign funding for French mosques must stop. But as Rachid Benzine, an expert with the Paul Ricoeur Fund points out, the governments which finance French mosques are themselves fighting jihadists, and to ban their contributions is to designate them as enemies.

Taxes on halal food or pilgrimages to Mecca are possible ways of financing the FOIF, both under consideration.