EU to consider fresh sanctions against Iran after missile tests

New sanctions would ‘have no legal or moral legitimacy’, Tehran claims 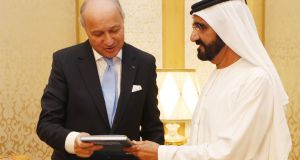 The European Union will consider this week whether to follow Washington’s lead and impose sanctions on Iran as a response to the country’s ballistic missile testing activity, the French foreign minister said yesterday.

Speaking during a visit to Abu Dhabi, Laurent Fabius said the EU would consider the matter this week. “We have to compare the American system and European system to see if there are new sanctions to take or not . . . This exercise will be implemented this week.”

The US imposed fresh sanctions on 11 companies and individuals for supplying Iran’s ballistic missile programme on Sunday, just hours after the West lifted sanctions against the Islamic republic as part of a historic rapprochement. An Iranian foreign ministry spokesman said yesterday that the new sanctions “have no legal or moral legitimacy”, adding that Iran’s missile programme “has never been designed to be capable of carrying nuclear weapons”.

EU foreign ministers meeting in Brussels yesterday had their first opportunity to give a collective response to the historic Iran nuclear deal confirmed at the weekend, which will free up about $100 billion (€92 billion) of frozen assets and allow Iran to begin selling crude oil to the EU and US. EU high representative Federica Mogherini said that while no date had been set for a European Commission visit to Tehran, the visit was in an advanced planning stage.

Speaking in Brussels, Minister for Foreign Affairs Charlie Flanagan welcomed the implementation of the Iran agreement, but he described the deal as a “first step”, adding that its implementation needed to be monitored. “But the signals are very positive and I do believe it presents great opportunity for the type of engagement and dialogue that we haven’t seen in the past,” he said.

Also under discussion was the Middle East peace process. Despite reservations from Greece and a number of other central and European countries, foreign ministers signed off on a joint statement, in which the EU expressed deep concern “that the continuing cycle of violence has led to a serious loss of human life in Israel and the Palestinian territories in recent months. The EU firmly condemns the terror attacks and violence from all sides and in any circumstances, including the death of children.”

The statement also reaffirmed the EU’s support for a two-state solution “that meets Israeli and Palestinian security needs and Palestinians’ aspirations for statehood and sovereignty, ends the occupation that began in 1967, and resolves all permanent status issues in order to end the conflict.”

Ministers also met Jordan’s minister for foreign affairs, Nasser Judeh, in a discussion that focused on the Syrian conflict and refugee crisis.

According to the UN refugee agency, the UNHCR, more than 630,000 refugees are currently residing in Jordan.