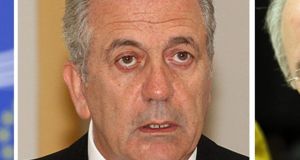 European commissioner Dimitris Avramopoulos: “EU citizens expect us to trust each other, to share information and to work effectively together to co-ordinate concrete actions”

The European Commission has vowed to step up co-operation between member states and EU agencies in an effort to combat terrorism as it launches a new five-year EU security strategy. Among the measures proposed by the European Commission are the establishment of a European counter-terrorist centre, the launch of an EU forum on IT to encourage greater co-operation between member states and the IT sector and increased funding for agencies such as the European Criminal Records Information System.

Unveiling the policy, which has been signed off by the European Commission, EU commissioner for migration, home affairs and citizenship Dimitris Avramopoulos told the European Parliament in Strasbourg that the threats to Europe’s citizens were becomingly increasingly cross-border in nature.

“Because new and complex security threats have emerged, that are increasingly cross-border and cross-sectoral in nature, we cannot but face them together,” he said. “To address in a proper way these threats, we need to work together in order ensure the security of European citizens and protect their rights and freedoms. EU citizens expect us to trust each other, to share information and to work effectively together to co-ordinate concrete actions.”

Enhancing the powers of Europol, the EU’s law-enforcement agency, is also a key element of the proposal, with the commission pointing out that close co-operation in the fight against organised crime has already yielded results. The document cites the arrest of 77 individuals last month who were suspected of large-scale migrant-smuggling, with arrests made in seven countries.

Terrorist attacks in Paris and Copenhagen this year have focused attention on the EU’s counter-terrorism policy, as Europe struggles with the problem of EU citizens returning to Europe having fought for jihadist movements in the Middle East.

However, despite the move towards greater co-operation between national agencies, data protection and privacy concerns have been raised by civil liberty campaigners and centre-left MEPs in the European Parliament.