EU partners edge towards position on Trump at G20 summit 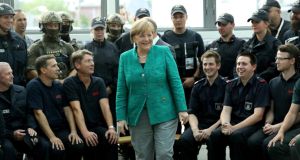 German chancellor Angela Merkel thanks members of German law enforcement and emergency services at the conclusion of the G20 summit in Hamburg. Photograph: Sean Gallup/EPA

Quiz question: which G20 leader urged the world’s major economies at the weekend to embrace “interconnected growth for shared prosperity” and “win-win solutions to common challenges we face”?

It wasn’t US president Donald Trump. He skipped out of Hamburg without a press conference, describing the two-day gathering in Hamburg on Twitter with characteristic hyperbole as a “wonderful success”. “Explained that the US must fix the many bad trade deals it has made,” he tweeted. “Will get done!”

Seven months after the “America First” president took office, Trump saw his second trip to Europe as a series of home runs. In Warsaw, his supporters saw a president cheered by an adoring (bussed-in) crowd and heard warnings of a looming clash of civilisations over Islamist extremism.

The speech, written largely by hardline adviser Stephen Miller, was one long dog whistle to national conservative Trump supporters at home and in central Europe. Their nationalist policies on trade, security and globalisation, he predicted, would put them on the right side of history.

In Hamburg Trump supporters again saw a strong leader, greeting German chancellor Angela Merkel with an air punch for the television cameras and standing firm – nobly alone – in rejecting the reviled Paris climate agreement. In Hamburg, a city built on centuries of global trade, Trump’s negotiators haggled for two days and two nights before agreeing to communique concepts – open markets, anti-protectionism – that, until now, were a given.

The Trump administration didn’t pull the plug on the global order in Hamburg but put the world on notice, with a last-ditch effort launched to stop a trade war on steel. But in hindsight the Hamburg G20 communique, acknowledging the legitimacy of “trade defence instruments”, may go down in history as the last hurrah of multilateral globalised trade – at least with US involvement.

Trump said he was “honoured” to meet Vladimir Putin and took the Russian leader’s bait about the Trump-critical media – within earshot of the travelling press. Despite promising “consequences” for North Korea’s missile tests, he glossed over lack of progress on North Korea in more than two hours of talks. On Twitter, he said Russian president Vladimir Putin denied of involvement in the US – without giving his own view – and vowed to “move forward constructively” with Moscow.

Trump was not the only problem bear in Hamburg. Turkish president Recep Tayyip Erdogan arrived in a thunderous mood, accusing Germany of “committing suicide” for refusing him permission to hold a political rally in the city. In his final press conference, Erdogan poked holes in the Paris climate agreement but, crucially, his negotiators – and those from Saudi Arabia – resisted overtures from the Trump side to join the anti-Paris US camp.

The other take-home from the G20 was a rising alliance between summit veteran Angela Merkel and the next generation of progressive western politicians. French president Emmanuel Macron said he was optimistic the door was not yet closed on climate talks with the US. Canada’s Justin Trudeau, ending a six-day tour of Europe, was cheered like a rock star by 12,000 activists at the Global Citizen Festival and praised by World Bank head Jim Yong Kim as an “incredible breath of fresh air”.

For Merkel, Hamburg was a mixed blessing. She succeeded in holding the G20 together on globalised trade, for now, and prevented further cracks emerging over the Paris climate deal. But for Germans who go to the polls in September, the details of Merkel’s G20 summit are overshadowed by television images: three nights of violent street battles, traumatised Hamburg residents, looted stores, burned-out cars.

On the final day of talks, a seasoned if exhausted G20 official described dealings with the Trump administration as tiring. Europe is “moving in small steps towards a certain normality” with the Trump administration. The official left open what that normality will be. Perhaps the new normality after Hamburg lies in the answer to the quiz question. It wasn’t Trump who called for “interconnected growth for shared prosperity” but Xi Jinping, president of China. His last words to G20 colleagues sounded like an American Requiem in the Trump era: “Those who work alone, add; those who work together, multiply.”