EU Ombudsman Emily O’Reilly has tobacco industry in her sights 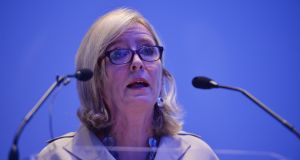 Tucked away on the busy streets around the European Parliament in Brussels lie rows of gleaming buildings. Behind the discreet brass plaques lie the Brussels headquarters of some of the world’s biggest corporations, law firms and lobby groups.

Along with Washington, Brussels is one of the lobbying capitals of the world. It is estimated that up to 30,000 lobbyists operate in the European capital, working to influence EU policy-making.

While the modern lobbyist is more likely to be a Google executive attempting to influence the EU’s increasingly powerful role in regulating US technology giants, the more traditional image of corporate lobbyists also rings true.

The murky world of tobacco lobbying is still a powerful force in Brussels. While much legislation relating to the tobacco industry is enacted at national level, recent legislation, such as the 2014 EU Tobacco Products Directive, shows that the EU wields significant power.

That directive, agreed during the Irish presidency of the Council of the European Union in 2013, introduced a host of binding measures affecting the manufacture and sale of tobacco products, including a requirement that health warnings must cover at least 65 per cent of cigarette packets. For tobacco companies this was fertile ground for lobbying, particularly as the legislation went through the European Parliament.

An internal memo from tobacco giant Philip Morris leaked at the height of the negotiations to the Guardian and other media outlets revealed the extent of the company’s contact with EU representatives. The documents show that the company met with 233 MEPs – close to a third of all members of the European Parliament.

Staff members of at least two MEPs went on to work for Philip Morris. According to a report for Corporate Europe Observatory, MEPs complained of receiving e-cigarettes in their letter boxes, unsolicited tobacco lobbyists turning up in their offices, and invitations to drinks, dinners and cocktail events.

Last October she published a report which found that the European Commission’s approach to publicising meetings with tobacco lobbyists was “inadequate, unreliable and unsatisfactory”.

The Commission, she argued, had failed to properly implement the World Health Organisation’s Framework Convention on Tobacco Control, to which the EU is a party, and which states that parties should be “accountable and transparent” when dealing with the tobacco industry.

In an unusual step, the Commission rejected the findings. Addressing the conference yesterday, which was attended by the EU Commissioner for Health, O’Reilly said she was “surprised” by the Commission’s response.

“To put it crudely, I thought this would have been an easy win for the Commission,” she said, referencing the Juncker Commission’s commitment to improve transparency. She expressed hope that the Commission would still act on the matter given criticism from the Parliament and others.

She also raised the heckles of another group. Unusually for an EU conference, the meeting threatened to spill over into drama when Irish man Ronan Barry, chairman of the Confederation of European Community Cigarette Manufacturers, complained that industry representatives had not been permitted to participate in the panel discussion.

The typically imperturbable O’Reilly kept her cool, pointing out that, as the representative of an EU institution, she was working within the rules of the FCTC convention. The WHO’s Roberto Bertollini was even more to the point.

“I think there’s nothing to discuss with the tobacco industry,” he said bluntly. “We have an industry that kills half of its users and has no added value in my view – they simply have to be defeated.”

For its part the tobacco representative group argued that EU rules on transparency should apply to all entities – a position that even found common cause with the Green Party, with Margrete Auken MEP pointing out that equivalent transparency standards were needed in relation to pharmaceutical products and pesticides.

While recent developments such as the strengthening of the EU Transparency register represent a step in the right direction in terms of transparency in the EU, the European Commission’s failure to take on board the findings of the Ombudsman’s inquiry into tobacco lobbying disclosure is a worrying sign of how far things still have to go.