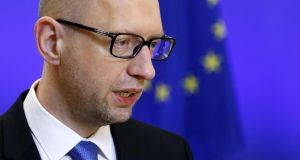 European Union leaders were locked in discussions last night about allowing the European Commission greater oversight over energy contracts with suppliers, as the EU pledged to keep up pressure on Russia over the Ukraine crisis.

The proposal to allow the commission to check energy contacts for compliance with EU rules is a controversial one, with a number of countries raising concerns around confidentiality issues. With the EU dependent on Russia for almost 30 per cent of its gas supplies, the bloc is trying to reduce its energy reliance on Moscow, but a number of eastern European countries are concerned about jeopardising relationships with gas suppliers.

The renewal of sanctions against Russia was also under discussion, with European Council president Donald Tusk leading calls for member states to commit to extending sanctions that fall due in July until the end of the year.

German chancellor Angela Merkel told the Bundestag before departing for Brussels that sanctions would be lifted only if the Minsk agreement was implemented.

“We cannot and will not lift these sanctions when only the first demands of the Minsk agreements have been met, that would be wrong,” she said. “I will push this evening that the duration of the sanctions orient themselves on the Minsk package.”

Her comments were echoed by Mr Tusk on his way into the summit.

“One of the best ways of supporting Ukraine will be through upholding the sanctions pressure on Russia until we witness a full implementation of the Minsk agreement,” the former Polish prime minister said. “This must ultimately conclude in Ukraine regaining control of its borders, as foreseen in the plan brokered by President Hollande and Chancellor Merkel.”

Under a draft communique under discussion last night, leaders were asked to consider “enhanced regional co-operation” in relation to energy, but also committed to respecting “the right of member states to decide their own energy mix”, a compromise reflecting the sensitivities involved in the energy debate at EU level, where member states still exert significant national sovereignty.

“The European Council supports a strong, co-ordinated action through an active European climate diplomacy” ahead of the Paris summit, the communique said.

Addressing EU leaders at the start of the summit, European Parliament president Martin Schulz said it was vital that the EU diversified its energy supply. “Depending on just a few suppliers, some of them dominant or unreliable, like Russia, makes us vulnerable to divide- and-rule tactics and threats of blocking energy supply routes,” he said.

“In the short-term we would therefore be well advised to connect to as many different suppliers as possible, in particular in southeastern Europe. ”

commission has been clamping down on Russian state-owned company Gazprom, arguing that the company is potentially in breach of the EU’s “third energy package” rules which seeks to separate the ownership of energy pipelines and infrastructure from gas supply. In December, Russia pulled out of the South Stream pipeline project which would have brought gas directly from Russia into southeastern Europe. Instead it is pursuing a gas linkage with Turkey.

The EU first introduced sanctions on Russia in March 2014, gradually increasing the economic pressure on Russian and Crimean individuals and entities over the past year.

Latvia, which holds the six- month rotating presidency of the Council of the European Union, is one of a number of northeastern EU member states taking a strong line against Russia.

EU leaders also discussed the forthcoming eastern partnership summit in Riga in May, at which Europe’s relationship with the countries on its eastern border will be discussed.