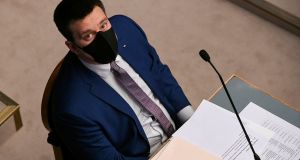 Estonian prime minister Juri Ratas has resigned as a corruption scandal engulfed his Centre party and its controversial coalition partners from the far right, whose comments have angered minority groups at home and the nation’s allies abroad.

Mr Ratas announced that he was stepping down after prosecutors revealed that the Centre party, its secretary-general, and an adviser to far-right finance minister Martin Helme were among suspects in an investigation into political links to the major Porto Franco property development in the Estonian capital, Tallinn.

“The suspicions lodged by the prosecutor general today do not yet mean that someone is definitely guilty, but they inevitably cast a serious shadow on all the parties involved,” Mr Ratas, who has been premier since 2016, said on Wednesday.

“In such a situation, giving, through my resignation, a possibility to shed light on all circumstances and achieve clarity seems the only right thing to do,” he added.

“Despite taking political responsibility, I can say with full peace of mind that as prime minister, I have not made a single malicious or knowingly wrong decision . . . I did not feel in the Porto Franco case that some minister or political party tried to influence decisions made by the government in an unlawful direction.”

The investigation centres on whether people close to government used their political influence to help the developers of Porto Franco in return for a large donation to party funds. Prosecutors are also looking into the unfinished project’s receipt of €39 million in state funds earmarked for firms hit hard by the coronavirus pandemic.

“Both personally and as a leader of a political party, I’ve always had zero tolerance for corruption. Such serious accusations naturally cause great concern and dismay for me,” said Mr Helme, finance minister and head of the far-right Ekre party, who suspended an adviser who is now under investigation in the case.

Mr Ratas retained power in 2019 despite losing that year’s elections, by forming a coalition between his Centre party and other parliamentary groups including Ekre.

The move was sharply criticised by erstwhile liberal allies of Mr Ratas at home and abroad, and his ruling alliance has been put under frequent strain by the strident comments of Mr Helme and his father and Ekre colleague, Mart.

Mart Helme described neighbouring Finland’s prime minister as a “sales girl”, claimed the “deep state” was pulling the strings in several EU nations and said gay people should “run to Sweden” if they thought they were being badly treated in Estonia.

He resigned as interior minister in November after describing incoming US president Joe Biden and his son Hunter as “corrupt characters”, during an interview in which Martin said the recent US elections had been “faked . . . plainly, boldly and on a massive scale”.