Erdogan calls on Turks to vote more power to presidency 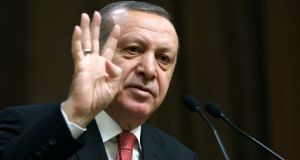 Turkish president Recep Tayyip Erdogan urged Turks on Tuesday to vote in favour of additional presidential powers in a referendum, saying failure to do so would encourage militant groups trying to divide the nation.

Mr Erdogan said he was still evaluating a parliamentary Bill on constitutional changes to create an executive presidential system in Turkey and would give a response this week.

Once Erdogan approves the Bill, a referendum will be held most likely in April, which, if passed, could lead to him holding office until 2029.

“I believe my people will never give a positive sign to Qandil, Imarali, and those terrorising our country,” he said.

He was referring to the Qandil mountains of northern Iraq, where the Kurdistan Workers Party (PKK) militant group has bases, and to the island prison of Imrali, where its leader has been jailed since 1999.

Mr Erdogan accuses members of the pro-Kurdish Peoples’ Democratic Party (HDP), which opposes the executive presidency, of links to the PKK, deemed a terrorist organisation by the European Union and United States.

Mr Erdogan has cast the stronger presidency as needed by Turkey at a time when it is fighting Islamic State, the PKK, and after a failed coup.

Turkey blames the network of US-based cleric Fethullah Gulen, which it calls the Gulenist Terrorist Organisation, for the coup attempt and has sought to shut it down at home and abroad.

Visiting Ethiopian president Mulatu Teshome Wirtu said he would shut down Mr Gulen’s schools and hand them over to Turkey’s Maarif (Education) Foundation.