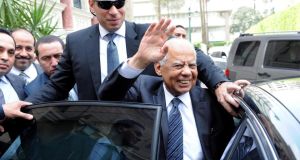 Egypt’s interim government headed by Hazem El-Beblawi has resigned in response to sharp criticism over its handling of the economy in a move likely to deepen the malaise of political instability and economic gloom.

President Adly Mansour is expected to accept the resignation and to call upon housing minister Ibrahim Mahlab to form a new government, reported the Egyptian news website Ahram Online.

The military-backed cabinet’s surprise decision was taken during a 15-minute meeting. Government spokesman Hani Saleh said that there was the “feeling that new blood is needed”.

Mr Beblawi and his cabinet have come under fire for adopting a minimum wage law that excludes key public sector groups, prompting strikes among public transport, postal and textile workers, as well as rubbish collectors, low-ranking policemen and doctors.

In a brief televised address, Mr Beblawi said the government, inaugurated on July 16th, had “made every effort” to overcome insecurity, economic pressures and political confusion. He said the few figures who had taken up cabinet posts after the controversial ousting of president Mohamed Morsi on July 3rd last year had been prepared to accept challenges, but were not necessarily the best qualified for posts.

Mr Beblawi is a prominent economist and was seen at the time of his appointment as the figure to tackle Egypt’s economic crisis. He has, however, been castigated in the media for failing to stem the downward slide.

He has also been unable to keep his team together. Deputy prime minister Ziad Bahaeddin resigned last month, arguing that following the approval by referendum of a new constitution, he had completed his role in implementing the road map adopted after Mr Morsi’s removal. Also a respected economist, he was regarded as being well qualified for the international co-operation portfolio.

He criticised the government for adopting a law prohibiting unlicensed protests as well as the cabinet’s failure to “preserve unity and overcome differences so that the country could survive the constitutional and economic collapse caused by former regimes.”

There is speculation that the move is also meant to pave the way for Field Marshal Abdel Fattah El-Sisi to resign as defence minister and army chief as he is expected to announce his candidacy for the presidency. A popular figure, he is expected to win. Under the new constitution the election must be held by mid-April.

Meanwhile, the crackdown on dissent continues. A Cairo court has upheld the designation of the Muslim Brotherhood as a terrorist organisation, bolstering the declaration made by the interim government last December.

In response to student protests at universities, mainly by Brotherhood supporters, the court has also ruled that police can be permanently posted on campuses, overturning a 2010 ban on deployment.

Last week another law was amended to allow university rectors to expel students for disrupting courses and exams, targeting facilities, attacking people and inciting and participating in violence.

Moderate fundamentalists and leftists are set to violate the ban on unlicensed demonstrations today with a rally on October 6th bridge, a main artery crossing Cairo and the Nile, calling for the release of all political prisoners.