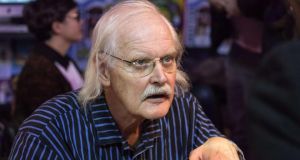 Dutch cartoonist Bernard Willem Holtrop, aka Willem, who lives in France and has contributed to Charlie Hebdo from the very first issue. Photograph: Pierre Duffour/AFP/Getty Images

An award-winning Dutch cartoonist who has worked with Charlie Hebdo since it opened in 1970 travelled by train to Paris on Wednesday morning – and was accidentally late for the editorial meeting at which 12 of his French colleagues were shot dead.

Bernard Holtrop (73), a contributor to the first issue of the magazine, said he had lost “colleagues and friends” in the gun attack, which made it more important than ever to ensure that the satirical weekly continued to publish.

Holtrop, better known by his pen name “Willem”, has lived mainly in France since 1968 when he captured the zeitgeist with his anti-Vietnam war cartoons, which appeared regularly in the left- wing daily newspaper Libération, founded by philosopher Jean-Paul Sartre.

He was unable to visit the Charlie Hebdo offices on Wednesday, but went there yesterday as the magazine’s lawyer, Richard Malka, confirmed that next week’s edition would be published as scheduled – with a mammoth print-run of one million copies rather than the usual 60,000.

Holtrop said he could not think of another “attack on the entire written press” in which a whole editorial team had been wiped out, observing: “This has become a very dangerous profession . . . ”

However, he said he recalled his first reaction to the news of the killings, the deadliest attack in France since 1961: “I must not let this scare me. We must not be deterred. We must continue what we are doing, now more than ever.”

In the Netherlands, King Willem-Alexander said he was “deeply shocked” by the killings, while prime minister Mark Rutte described them as “a terrible and cowardly terrorist attack”, adding: “The Netherlands stands shoulder to shoulder with France.”

The Dutch are no strangers to the controversy over radical Islam that has followed Wednesday’s shootings.

Still ingrained in the national consciousness here is the murder in 2004 of director Theo van Gogh, who was shot, stabbed multiple times and had his throat cut by a 26-year-old Dutch Moroccan angered by his film Submission, which was critical of the treatment of women in Islam. Death threat The script for van Gogh’s film was written by Somali-born Ayaan Hirsi Ali, and a death threat addressed to her was pinned to his body with a knife implanted in his chest. Hirsi Ali subsequently went into hiding and left the Netherlands to live in the US.

Van Gogh was well known as a friend and supporter of populist politician Pim Fortuyn, who infamously described Islam as “a backward culture”, and who was also assassinated during the 2002 Dutch general election.

The role of outspoken – and often outrageous – critic of Islam has been taken since the deaths of Fortuyn and Van Gogh by right-wing politician Geert Wilders, whose Freedom Party is currently leading the opinion polls in a country deeply concerned by jihadists returning from Iraq and Syria.

Like Charlie Hebdo’s late editor, Stéphane Charbonnier, Mr Wilders, who notoriously likened the Koran to Hitler’s Mein Kampf, was added to al-Qaeda’s most wanted list in 2013 and lives with 24-hour police protection.

Given that context, the Dutch understand better than most the convulsions France is experiencing at the moment.

They sympathise. Vigils in protest at the Charlie Hebdo killings were held in Amsterdam, The Hague, Utrecht, Rotterdam and many other cities.

The mayor of Rotterdam, Ahmed Aboutaleb, the son of a Berber imam in a small village in Morocco, and Elsevier’s Dutchman of the Year for 2014, lashed out at radical Muslims, saying “If you don’t like freedom, then in heaven’s name pack your bags and leave.”