President François Hollande calls for unity, saying ‘nothing can divide us’ 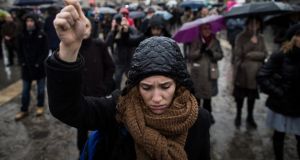 A young woman holds a symbolic pen as she joins others for a minute of silence in front of Notre Dame cathedral in memory of the 12 victims of the massacre at the Paris headquarters of satirical magazine Charlie Hebdo. Photograph: Ian Langsdon/EPA

At noon, France fell silent. The trains stopped, classrooms went quiet and in every public building in the country people stopped what they were doing and paid eloquent tribute to the memory of the dead.

At Notre Dame, they bowed their heads in the slanting rain and listened to the pealing bells.

At Place de la République, they quietly formed protective rings around the soaring Marianne, symbol of the Republic, and the three statues at her side, representing the sacred pillars Liberté, Égalité and Fraternité. Many of them wept.

Standing on his own, watching barely flickering candles on the improvised shrine that Marianne’s statue has become this week, Nicolas Stutzmann, a magician and artist, stared as if in disbelief.

“I couldn’t not have come,” he said. He wanted to mourn and pay tribute to the journalists and police killed in the attack on Charlie Hebdo’s offices, Stutzmann said, but also to insist on the values that were at stake. “Cartoons are childlike – the people who draw them are creating something universal. They [the attackers] hit such a fundamental thing,” he said.

Yet in the outpouring of horror and solidarity, he found some reassurance, some solace. “We live in a world where people are turning in on themselves more and more, towards individualism. This is proof that there is more to it all than that.”

Yet reverence for the dead and the sense of social solidarity the atrocity has engendered (temporary though it may turn out to be) coexist uneasily with the tension that has visible expression in the hundreds of armed police and soldiers patrolling the streets or standing guard outside schools and newspaper offices.

Paris awoke yesterday to news that a policewoman had been shot dead in the south of the city. A few hours later, a suspect package prompted the evacuation of the Gare du Nord. Rumours of armed men, shootouts, explosions and bomb threats make the rounds on social media and over the airwaves.

At one point reports circulated that two men suspected of Wednesday’s attack were heading to Paris from Picardy in a grey Renault Clio. Within minutes, TV stations showed footage of men with pump-action shotguns surveying traffic at the northern gateways to the city, as if it were under siege.

Libération chose the slogan “We are all Charlie” against a black front page. “The hooded bastards declared war on France, on our democracy, on our values,” said the business daily Les Échos in an editorial. Even the sports daily L’Équipe put it on the front. “Liberté 0, Barbarie 12”, said its cartoon scoreboard.

Charlie Hebdo itself may return as early as next week. Patrick Pelloux, a Charlie Hebdo columnist who was not in the office during the attack, sobbed as he told a television interviewer the newspaper would come out next Wednesday on time. “It will be tough,” he said. “We must not give in.”

A lawyer for the paper said its surviving staff had “no computer, no pencil, nothing” following the attack, which badly damaged the offices and turned them into a crime scene, but it plans to produce a paper and print a million copies (the normal print-run is 60,000). Libération offered office space, while Radio France, France Televisions and Le Monde said they would provide “all the human and material means necessary so that Charlie Hebdo continues to live”.

The attacks have given rise to fears that members of France’s large Muslim community could face a backlash. That was the first reaction of the shopkeeper at Maison d’Emmour, an Islamic bookshop in the 10th arrondissement, next door to the mosque where one of the prime suspects was allegedly radicalised.

Before he left Place de la République, Nicolas Stutzmann nodded towards the statues; the one representing Liberté has had an X marked across her mouth with black masking tape.

“Égalité is having the same rights,” Stutzmann said. “Liberté consists in writing what we want. And fraternité is the moment we’re all experiencing now.”