Delicate balancing act in relationship between Europe and Russia

Europe letter: with Russia’s accession to the World Trade Organisation, many European businesses hope for a more lucrative relationship 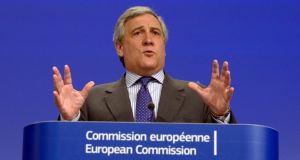 EU commissioner for enterprise and industry Antonio Tajani believes the EU can offer an excellent way for businesses to grow their links abroad. Photograph: Eric Vidal/Reuters

This year’s annual late spring-early summer exhibition at Brussels’s national gallery was devoted to Russian artist Wassily Kandinsky. The father of abstract art was fascinated by Europe from an early age, gravitating towards Berlin and Paris as an adult, where the distinctive shapes and colours of his unique form of formalism developed and flourished.

The exhibition took a fresh look at Kandinsky, exploring how the artist’s Russian inheritance informed his work throughout his life.

As the celebrations of the centenary of the first performance of Stravinsky’s Rite of Spring in Paris illustrate, the cultural connections between Russia and Europe run deep.

But while Europe and Russia have been in dialogue with each other for centuries culturally, their relationship in other spheres is not quite so comfortable.

Lithuania’s chair of the rotating presidency of the European Union has shifted the attention of the EU eastwards. The small Baltic nation has already said it hopes to tackle its energy dependency on Russia during its presidency, while it also aims to make progress on an association agreement with Ukraine.

Both are contentious subjects for Russia. While relations bet- ween the two blocs are officially governed by a “partnership and co-operation agreement”, diplomatically the EU and Russia tend to keep a polite distance from one another, with tensions flaring periodically.

Already this year this friction has manifested itself in a number of ways.

During the Cypriot bailout crisis, Russia intervened with what looked like a promise of financial help while the euro zone dithered, although a firm offer failed to materialise.

Last week, the conviction of Russian opposition figure Alexey Navalny raised “serious questions as to the state of the rule of law in Russia” , according to EU foreign policy chief Catherine Ashton.

The relationship between Russia and the EU involves a delicate balancing act. Despite underlying tensions, the two blocs are highly dependent on one another. This is particularly the case with energy.

Russia is the largest exporter of oil and gas to the EU, supply- ing about 30 per cent of the bloc’s gas supplies, with state energy company Gazprom controlling key infrastructural assets, particularly in eastern Europe.

A long-running Ukrainian gas dispute over price that began in 2009 saw Russia severely curtail exports through Ukraine, highlighting the EU’s dependency on Russia as an energy source. Lithuania is building a liquefied natural gas terminal off its coast in a bid to wean itself off Russian gas supply. The EU’s “third energy package” aims to liberalise energy markets by decoupling energy supply from infrastructure, but has met resistance from Moscow.

Trade is the other sphere that connects the two. Russia is Europe’s third-largest trading partner, with EU exports to Russia topping €123 billion last year. The relationship though has been characterised by disputes over levies and protectionism for years.

Russia’s accession to the World Trade Organisation last October after almost two decades of negotiation was seen as an important milestone, but earlier this month the EU launched its first formal trade action against Russia, accusing Russia of protecting its car- makers by imposing a recycling fee on imported vehicles.

Nonetheless, there are moves to exploit the enormous trade potential .

Last month, EU commissioner for enterprise and industry Antonio Tajani led a delegation of EU businesses to Moscow and St Petersburg in a bid to foster trade links and business opportunities.

It is the latest in a series of trade missions spear headed by his directorate general in the European Com mission, which has seen EU businesses visit a number of emerging market countries across South America and Asia.

The EU tends to shy away from EU-based trade missions, preferring to leave it up to individual member states, but the sprightly Italian commissioner believes the EU can offer an excellent way for businesses to develop their links abroad.

“For larger member states, it can be relatively easy to make connections, but for smaller member states in particular, being part of the European Union can open doors.”

Privately, companies say that excessive and often times protectionist legislation as well as corruption, are the main barriers to trade with Russia, but with a market of almost 150 million people, many are prepared to persevere.

With WTO accession offering Russia the potential to open up its market and embrace reform, many European businesses will be hoping that a new era of EU-Russian relations based on trade may be possible.