‘Deep differences’ between Berlin and Washington over US double agents

Nothing resolved by Merkel and Obama phone conversation 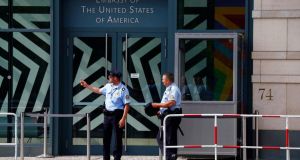 Security officers outside the US embassy in Berlin. A spokesman for Chancellor Angela Merkel said she was still waiting for the CIA station chief in the embassy to comply with her demand and leave Germany. Photograph: Reuters

German chancellor Angela Merkel and US president Barack Obama remain at odds over double agents discovered working for US intelligence inside the German government.

The two leaders spoke by telephone on Tuesday evening, their first contact since news broke of the two alleged agents, but neither side spoke of any significant progress.

But a spokesman for Dr Merkel said she was still waiting for the CIA station chief in the US embassy to comply with her demand and leave Germany. Last week’s demand, for the agent to leave before he was expelled, has been seen as an indication of frustration in Berlin after a year of revelations about US surveillance and fruitless talks with Washington on the future of intelligence co-operation.

Dr Merkel’s spokesman, Steffen Seibert, said direct contacts would continue, but that the “deep differences of opinion” between Washington and Berlin over the limits of US intelligence work “were a matter that a few conversations couldn’t solve”. Mr Seibert declined to say who initiated Tuesday’s phone call.

Dr Merkel’s remarks last week that it was a “waste of energy” for allies to spy on each other have caused annoyance in Washington, with US officials suggesting there were more discreet ways to communicate displeasure.