Cyprus gets assurances on Turkey from EU leaders 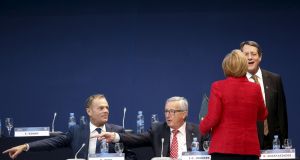 Cypriot president Nicos Anastasiades has received assurances from EU leaders that Turkey would be expected to meet commitments to the bloc and adhere to EU law in exchange for accelerating its accession to membership.

Cyprus wants to ensure that EU standards and rules will apply in any agreement on reunification of the divided island reached with the Turkish Cypriots and approved by Turkey.

These assurances were extended in talks between Mr Anastasiades, German chancellor Angela Merkel and Commission president Jean Claude Juncker on the sidelines of this week’s European People’s Party congress in Madrid.

Dr Merkel has promised to renew stalled negotiations on Turkey’s bid for EU membership in exchange for Turkish restrictions on the flow of migrants to Europe. To assist it with this Turkey is also to receive €3 billion in EU aid.

Cypriot foreign minister Ioannis Kasoulides has declared that accession talks could focus on the 17th topic, or “chapter” of EU rules dealing with the economy and monetary policy. He reiterated the government’s refusal to lift its veto on six other “chapters” out of a total of 35, effectively blocking Turkey’s EU entry.

Since chapter 17 is not among those frozen by Cyprus, this is regarded by commentators as a face-saving measure for both Berlin, which seeks to court Turkey, and the ruling Turkish Justice and Development party, which wants to show progress in Ankara’s bid to secure EU membership ahead of a parliamentary election on November 1st.

Cyprus has taken this stand because of Ankara’s 41-year occupation of the northern 36 per cent of the island and the presence of 30,000 Turkish troops and thousands of settlers in the area. Although there has been considerable progress in reunification talks between Mr Anastasiades and Turkish Cypriot leader Mustafa Akinci, the toughest issues have not yet been resolved.

Mr Kasoulides said, “As things presently stand, we cannot give our consent” to discussions on other chapters, notably on judiciary and fundamental rights; justice, freedom and security; and energy, where Turkey has obstructed the republic’s exploration for off-shore oil and gas.

Furthermore, they are not ready to grand Dr Merkel any favours since Germany adopted a harsh stance towards Cyprus during the 2013 financial crisis and compelled Nicosia to accept a bail-in whereby bank deposits above €100,000 were subjected to a haircut as well as austerity measures that have driven the economy into recession and affected every Greek Cypriot family.

Europe’s closest landfall to war-torn Syria, Cyprus has been largely bypassed by the flow of refugees from Turkey to the EU although on Wednesday 114 Syrians on two boats landed at the British sovereign base at Akrotiri on the southern coast, after being abandoned by smugglers.

Cyprus has agreed to process the asylum application claims of the refugees on behalf of the bases although under a 2003 agreement between Cyprus and Britain, asylum seekers who land at Britain’s bases are its responsibility. Refugees can receive services from the republic if costs are borne by Britain, which has to arrange for their resettlement elsewhere.

The latest migrants, who seek to travel to Germany, are due to be accommodated at a centre near Nicosia hosting 115 who arrived on the republic’s shores last month.