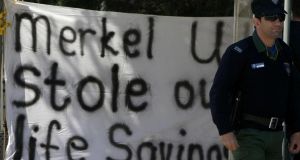 A police officer stands by a protest banner outside of parliament before a meeting in Nicosia yesterday. Photgraph: AP

Angry Cypriot bank depositors appeared to have won concessions on the terms of the Cypriot bailout deal last night, after euro zone finance ministers urged Cyprus to protect depositors with savings of less than €100,000.

In a statement following an evening teleconference, euro zone finance ministers said that “small depositors should be treated differently from large depositors”. While it was unclear if Cyprus would agree to the proposal, such a move would push the burden of the deposit tax onto larger deposit holders, many of whom are Russia n investors.

Speaking in Washington, Taoiseach Enda Kenny downplayed suggestions that reaction to the Cyprus bailout could have negative implications for Irish banks.

In the Cypriot capital of Nicosia, political deadlock over the bailout deal continued throughout the day, after a key parliamentary vote on the deal was delayed again, having been scheduled to take place yesterday. As public anger continued over the unprecedented decision to levy depositors as part of the euro zone’s bailout for Cyprus, the government confirmed that banks would remain closed until Thursday.

President Nicos Anastasiades needs to secure political support for the bailout deal agreed with the Troika of international lenders on Saturday, which proposed a 9.9 per cent levy on savings of more than €100,000 and a 6.75 per cent tax on deposits below that threshold. If the deal is not passed by government, the country could face bankruptcy, he has warned.

While Mr Anastasiades’ Democratic Rally party and its junior coalition partner, the Democratic Party, hold 28 of the 56 seats in parliament, two members of the smaller party oppose the deal.

Cyprus first sought a bailout last June after its banks were impacted by the Greek sovereign debt write-down, but final agreement on the deal was delayed by the Troika of international lenders amid suspicion of illegal money-laundering and doubts about the country’s commitment to economic reform.

As protestors staged demonstrations in Nicosia, Russia weighed into the debate, condemning the plan to tax savings which is expected to hit Russian savers.

President Vladimir Putin and prime minister Dmitry Medvedev lambasted the EU plan, which would affect billions of euros held by Russians in Cyprus, while Moscow’s finance minister warned that it might no longer be willing to ease the terms of a €2.5 billion loan to Nicosia. Of the €70 billion deposited in Cypriot banks, about half belongs to Cypriots and residents, including some Russians and Britons, and half to non-residents.

Having fallen sharply in early trade, stock markets regained some ground during the session, though the euro fell to a three-year low. Italian and Spanish bond yields both rose sharply, reflecting fears about the weakness of the two euro zone economies and the size of their debt burdens. European shares closed 0.3 percent lower, having at one point been down as much as 1.4 per cent.

Yields on Ireland ’s 10-year benchmark bond issued last week rose slightly to 4.086 per cent but remained below the 4.15 per cent level at which they were issued.

The European Central Bank warned that failure to agree an aid programme for Cyprus could cause “considerable difficulties” for Ireland and Portugal as they prepare their return to financial markets.