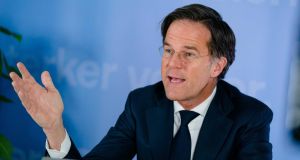 The Netherlands’ caretaker government has extended the coronavirus lockdown and its controversial overnight curfew until at least March 15th – the first of three days of voting in a general election without precedent in the country’s history.

There had also been a widespread expectation that postal voting might be extended beyond those over 70 to others vulnerable for medical reasons, but that was ruled out by a court last week on the grounds that the precautions being taken were adequate.

“We can’t give a 100 per cent guarantee but we’re doing everything we can,” said home affairs minister Kajsa Ollongren. “National elections every four years are a cornerstone of our democracy. It’s not something we should change or put off lightly.”

The problem for the government, however, is that some of those most cautious about whether the election should be held at all, at this stage, are members of its own expert coronavirus taskforce, the Outbreak Management Team.

Those most vociferous include Diederik Gommers, chairman of the intensive care consultants’ association; Jan Kluytmans, an eminent microbiologist; and infectious diseases professor Marc Bonten – all of whom have increased the pressure on caretaker prime minister Mark Rutte.

Mr Gommers pointed out that the effect of the election hadn’t been modelled by the public health institute. “If you take risks, you have to calculate them,” agreed Mr Kluytmans, who favoured an extension of postal voting.

Prof Bonten pointed out that forecasts for the development of the virus in mid-March remained “very uncertain”, adding: “So, if you get a peak around then, it’s a very bad time to bring people together for something like an election.”

An analysis of French regional elections during the first Covid-19 wave last year indicated there were some 4,000 additional hospital admissions in a population roughly four times the size of that of the Netherlands. French scientists disagreed, however, on whether there was a direct correlation.

As Mr Rutte and health minister Hugo de Jonge announced the easing of some minor restrictions on Tuesday evening, including the reopening of secondary schools and hairdressers from early March, latest figures were not encouraging – with the number of new cases 19 per cent higher in the third week of February.

Meanwhile, an appeals court will rule on Friday on the legality of the overnight curfew first introduced in January. A lower court in The Hague threw out the measure last Tuesday, subsequently restoring it pending the appeal.

3:49 Q&A: Exactly what restrictions are being lifted from today?