The best and worst-case scenarios under the latest Government plan 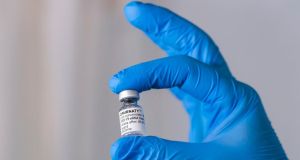 A vial of the Pfizer-Biontech vaccine against Covid-19. Photograph: Matthias Rietschel/Getty Images

The rest of the first quarter, to the end of March:

The vaccination programme will ramp up in the weeks ahead as the rest of the over-70s get their first jab and some of the older cohorts within that age group get their second dose. The programme for healthcare workers will also continue.

The Government has reordered the next priority categories, with those with higher-risk medical conditions getting priority. A start should be possible on the next in line – the “ very high-risk” group – in quarter one, with at least some getting their first vaccinations.

A plan for the gradual reopening of schools, starting in March and contingent on virus trends, has been set out.

Non-Covid healthcare and social care services are also to reopen.

Best-case/worse-case scenarios: At this stage the key issue is whether numbers remain low enough to allow schools to gradually reopen and what happens when they do. Any upset to this would be a big setback.

The next key landmark is April 5th, the review date for current restrictions. The Government has not set down clear markers about what would allow the next phase of reopening to start. However ministers have referred to a halving of ICU numbers, now at 149, as well as case number trends, with the plan referring for the need to keep the R number under 1.

What might reopen? Initially the Government said the next phase would, trends permitting, involve consideration of three measures : allowing people to meet members of more than one other household outdoors; a change in the 5km limit; and a phased resumption of some outdoor activities including some sports and construction.

Among the likely options, judging by previous experience and the stages of the official Covid-19 plan, might be the resumption of golf and tennis and non-contact training for some sports.

The Government has said three to four weeks will be left after any easing before further measures are considered – so it remains unclear what might happen in early April and what might be scheduled a few weeks later.

Best-case/worse-case scenarios: The optimistic scenario would see favourable virus numbers, an easing of some restrictions and some indication of a contingent timetable for further easing into the summer. In a worst-case outcome, virus numbers would remain stubbornly high, putting any easing in doubt.

The second quarter – April to June:

We should see a big ramp up in the vaccine rollout. The Government expects 80 per cent of the adult population of about 3.75 million people to have at least one vaccine by the end of June – and 55 to 60 per cent to have had two jabs.

Vaccine numbers are likely to rise to more than 300,000 a week, and could even go to 350,000 to 400,000 a week at peak, meaning progress can be made on a range of population groups at the same time. Moving through this quarter, we should start to see a significant fall in hospitalisation and deaths.

The precise timetable for different groups remains fluid, with different gaps between vaccines, the one-shot Johnson&Johnson jab coming on stream, and ongoing assessment of the UK-style policy of rolling out one vaccine to as many as possible first, currently not being followed here.

The reopening schedule is a matter of speculation. However, allowing for three- to four-week gaps, perhaps non-food retail and personal services like hairdressing would return in May, along with outdoor dining and a further easing of travel restrictions within Ireland.

Assuming trends are favourable, the big issues will be reopening hospitality, including hotels and restaurants. The Taoiseach has indicated mid-summer as the time this might happen, leading the sector to believe it might be late in June as happened in 2020, allowing for a staycation season. A big issue here is when the industry – and the public – will know, given the need to make bookings. At this stage it looks like it might be well into April before there is any clarity and possibly later.

Best-case/worst-case scenario: On vaccinations, the expected arrival of the one-shot Johnson&Johnson vaccine, and the possible appearance of another vaccine called Curevac do point to the possibility of faster progress. Ireland may also get access to more supplies from exisitng suppliers as the Commission continues to talk to them about upping numbers. All the signs are that at this stage the main challenge will not be supply, it will be delivery.

An acceleration could see the vast bulk of the adult population with one jab by the end of June. This would allow more confidence in setting the reopening plan heading into the summer and confidence that further lockdowns could be avoided.

On a worst-case outlook, virus number staying high could leave the reopening plan stalled and raise doubts over the staycation season. Variants could raise more nerves here and across the EU, particularly if current vaccines do not work well against them.

The third quarter: July to September

The vaccination programme should have made big progress and case numbers as well as deaths should have fallen sharply by now. Vaccine supply should not be an issue, with enough to vaccinate the population more than twice over on order. The goal is to have the adult populaton all vaccinated by September.

The Government will hope to have most of the economy open at this stage – but not the highest-risk sectors, including wet pubs and large gatherings. And foreign holidays are likely to be still off the agenda given the variant risk, notwithstanding confidence in the UK that they can happen. Reopening travel is , as of now, looking uncertain.

Best-case/worst-case scenario:. On a best-case scenario, an acceleration of the vaccine programme would see the programme finishing for pretty much all adults early, perhaps by late July or August. People would be able to move about Ireland over the summer, though some restrictions on gatherings would remain, as would requirements to social distance and wear masks.

In a more pessimistic scenario, the reopening would have stalled and there would be concerns over numbers rising again over the autumn and winter, probably driven by variant fears.